Sources said the entire mission, from lift-off till the final splash down, was a perfect flight achieving all the mission objectives. 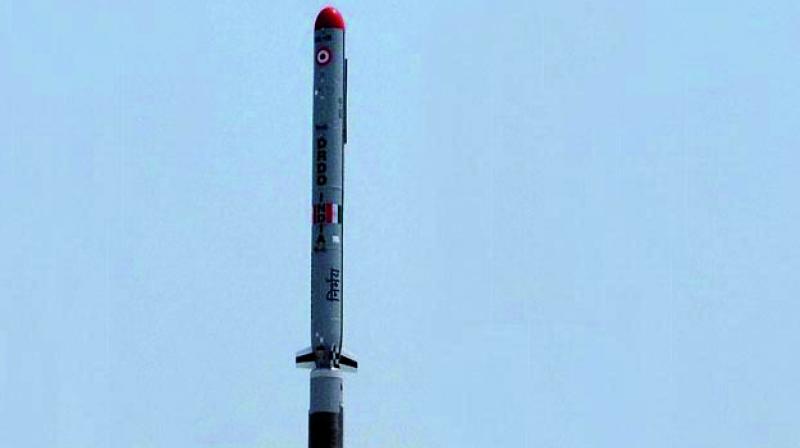 Propelled by a solid rocket motor booster, Nirbhay, with a turbo fan engine, is guided by a highly advanced inertial navigation system.

India on Tuesday test-fired its most sophisticated long-range sub-sonic cruise missile “Nirbhay” from the integrated test range (ITR) at Chandipur in Odisha’s Balasore district. According to DRDO sources, the indigenously-designed and developed missile with a strike range of 1,000 km was test-launched from a specially-designed launcher at 10.30 am from the Launch Complex-3 of the ITR. Sources said the entire mission, from lift-off till the final splash down, was a perfect flight achieving all the mission objectives. Propelled by a solid rocket motor booster, Nirbhay, with a turbo fan engine, is guided by a highly advanced inertial navigation system.

The maiden test flight of Nirbhay held on March 12, 2013, had to be terminated mid-way for safety reasons due to malfunction of a component, sources said.

However, the second launch on October 17, 2014 was successful. The next trial conducted on October 16, 2015, had to be aborted after 700 seconds of its launch. The missile was also test-fired last time in December 2017. There were reports that the test had failed even though there was no official confirmation on the reports. All these trials were conducted from the same defence base. Capable of carrying 24 kinds of war weapons, the missile is able to target multiple places simultaneously. After the missile achieves designated altitude and velocity, the booster motor is separated and the engine automatically switches on taking over further propulsion, sources added. Mid-way in its flight, missiles’ wing opens up by the commands generated by the sophisticated on board computer for stabilising the flight path.