India   All India  08 Oct 2021  Lakhimpur Kheri violence: No action to be taken under pressure says UP CM Adityanath
India, All India

Lakhimpur Kheri violence: No action to be taken under pressure says UP CM Adityanath

Four of the eight people who died on Sunday were farmers, allegedly knocked down by vehicles carrying BJP workers 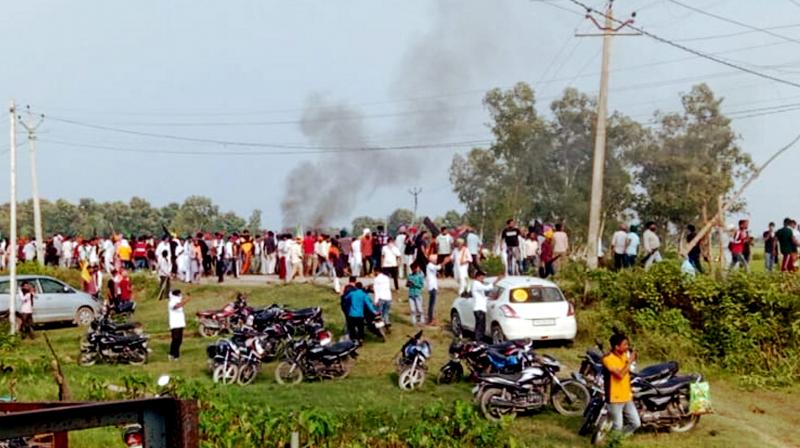 A vehicle set ablaze after violence broke out after farmers agitating were allegedly run over by a vehicle in the convoy of a union minister, in Lakhimpur Kheri. (Photo: PTI)

Lucknow: There will be no injustice with anyone and no action will be taken under any pressure, Uttar Pradesh Chief Minister Yogi Adityanath said on Friday, amid demands by the opposition to arrest Union Minister Ajay Mishra's son in the Lakhimpur-Kheri violence case.

Describing the violence, which left eight people, including four farmers, dead, as unfortunate, he said the government is going deep into the details of the incident.

"There is no place for violence in democracy, and when the law is giving guarantee to secure everyone, there is no need to take it into one's hands, whosoever they be," the chief minister said while speaking to a news channel.

On allegations that attempts are being made to save the minister's son, Ashish Mishra, in the case, Adityanath said, "There is no such video. We have issued numbers, and if anyone has evidence, they can upload it. All will be crystal clear. There will be no injustice with anyone. No one will be allowed to take the law in his hand but no action will be taken under any pressure."

"We will not arrest anyone on allegations. But yes, if someone is guilty, he will also not be spared irrespective of who he is," he said.

Four of the eight people who died on Sunday were farmers, allegedly knocked down by vehicles carrying BJP workers. Angry farmers then allegedly lynched some people in the vehicles.

The other dead included two BJP workers and their driver.

Farmers claimed that Ashish Mishra was in one of the vehicles, an allegation denied by him and his father who say they can produce evidence to prove he was at an event at that time.

Asserting that action in Uttar Pradesh is take based on evidence, Adityanath said, "We did this all over the state. Action was taken against whosoever evidence was found."

"Be it a BJP MLA or an opposition MLA and anyone in any post. We never hesitated in taking action. In Lakhimpur incident also, the government is doing the same thing," he said.

On pasting of notice summoning Ashish Mishra and his arrest, the chief minister said, "A special investigation team (SIT) has been constituted by the government and a judicial commission has also be formed."

The judicial commission will probe the entire case and officers in the SIT will delve into its details, he said.

"The arrests of those whose videos have come and involvement was confirmed have started," Adityanath said.

While Luvkush and Ashish Pandey have been arrested in the case, police have summoned the minister's son Ashish on Friday but he did not turn up.