India   All India  08 Oct 2019  What did Draupadi see when she looked into the magic mirror?
India, All India

What did Draupadi see when she looked into the magic mirror?

The plot starts with Hidimbi, married to Bhima, procuring a magic mirror which reflected what the heart of the one looking into it desired. 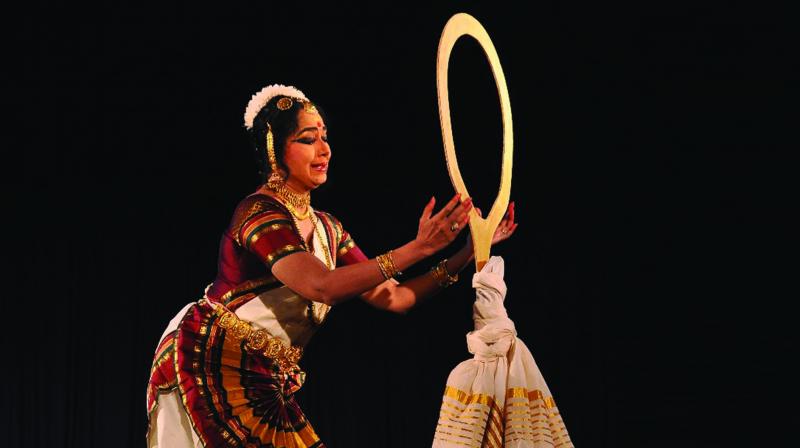 It is not often that one sees a tradition like Mohiniattam with its woman-centric focus — sporting a new kind of presentation — somewhere between the Kathakali mode of donning a character and the Mohiniattam style of narration about a character — particularly in a city like Chennai. Stories from myth are a dime a dozen, but in a different spin from the straightforward narratives drawn from our myths was Mohiniattam dancer Gopika Varma’s performance at Chennai’s Bharatiya Vidya Bhawan of Chhaya Mukhi, the inspiration for which came from a theatre presentation titled differently, which the dancer had witnessed almost a decade ago. Theatre, unlike classical dance is not tethered to a time-honoured form of presentation, for its living spirit is with present day concerns. And unusual twists in plots featuring characters from the Mahabharata or the Ramayana, viewed through a psychological lens, are not uncommon. One such attempt had left indelible images in Gopika’s mind, to be spun into a solo Mohiniattam production.

“I have presented the classical concert format for 40 years now, and I feel that I must take up more challenging themes — away from the traditional repertoire. This theme of Chaya Mukhi has been marinating in my mind for a number of years. I finally got down to giving it shape with help from Pragalbh, who penned the lyrics in simple Sanskrit, and Vishnu, who scored the music.”

Interacting with me, the dancer agreed that trained as she was under Guru Kalyanikutty Amma, it was the abhinaya knowhow she got under her Guru’s husband Kalamandalam Krishnan Nair that made her conceive of a theme which was more theatre.

The plot starts with Hidimbi, married to Bhima, procuring a magic mirror from the Gandharvas, which reflected what the heart of the one looking into it desired and nurtured, rather than the face. Passing the mirror on to Bhima, her beloved husband, she had him look into it, fully expecting that her face would be reflected as the loved one. Shocked and deeply wounded when she saw the face of Draupadi instead as the image in Bhima’s heart, Hidimbi became the faceless one wandering aimlessly. Meanwhile Bhima thought of passing on the mirror to Draupadi. His mind could not help wondering with some trepidation about Draupadi’s heart — if it was really sold out to Arjuna, the Pandava prince who won her in the Swayamvara. “No. I am sure that I occupy the highest place in her heart,” concluded Bhima, reliving in his mind all that he had accomplished for her — killing Dushasana by disemboweling him, and using all that blood to anoint Draupadi’s loose tresses and tying them up in a knot, thus fulfilling the vow she had taken when grievously shamed in the Kaurava court with Dushasana trying to disrobe her. So too during the Pandava period in exile, he — Bhima — was the one who had strangled Keechaka, the lewd prince trying to molest a hapless Draupadi disguised as maid Sairandri. And finally, was he not the chosen one of the five brothers she had approached, to secure for her the exotic Kalyana Saugandhika pushpam — which task he had undertaken gladly, traversing through thick forests and even waging a battle against his half-brother Hanuman! Convincing himself that no other man could be so close to Draupadi’s heart, Bhima passes on the mirror to Draupadi, who thanks him lovingly while very cleverly insisting that she preferred to look into it in privacy. In the confines of her room, Draupadi looks into the mirror and reels with shock when it reflects the face of Karna, her first love — the prince who had tried to win her hand in the Swayamvara and had successfully passed the tests posed to select the winner — till crafty Krishna had extracted from her an oath that she would under no circumstances agree to marry a “Soota Putra” (low caste), as Karna was believed to be. Wondering if she still nursed feelings for him, she finally convinces herself that what she saw was a Karna lookalike and not the prince himself. Then who was it?

The presentation by Gopika, with a large oval mirror on a stand, became an enactment of evocative abhinaya. As Draupadi, the dancer’s queenly deportment and posturing added much to the conviction of the portrayal. The starting point, with the qualities of the mirror (Darshayati hridayam), with Hidimbi dreaming dreams of her place in Bhima’s heart, only to be crushed into utter despondency and the episodes that Bhima re-enacts in mind were presented with expertise, the purusha or male element very well brought out. The music in the form of a soliloquy was full of ragas to catch moods. From the high point of a “Asamaanya vismayam” to “Kasya dasya a priye” in doleful Shahana, the varying moods were caught through ragas like Arabhi, Ranjani Todi, Natakuranji, Nalinakanth, Shahana, Shankarabharanam (Kalyana Sowgandhikam episode) and Lavangi. Changing from one character to another, occasionally punctuated with a nritta link, Gopika held the audience enthralled. The dancer added her own touch to the finale, of the lookalike image being that of Yudhisthira! To think of the one Draupadi resented deeply in her mind, for having used her as a pawn in a dice game (as dilated in many literary works), as her heart’s desire, seemed a little far-fetched. “How can Draupadi as Panchali have love for a sixth man?” was the reasoning given by the dancer. Somewhere, the bold experiment had taken to timidity in not wanting to smudge what myth had made of Draupadi! “It is a question of interpretation” is how many in the audience conceived the end.

The Onam spirit was reflected through secular participatory items — the starting group of her students doing Tiruvadiraikali in a round, and the finale through a pinnal kolattam.

Meanwhile, at Delhi Habitat’s Stein auditorium, Shivangi Vikram of Ahmedabad showed that her forte in Bharatanatyam is expressional dance, with nritta right from the starting 13 matra Alarippu dedicated to Ganapathi, correct though unexceptionable. The vintage Ponniah Pillai varnam “Mohamana en eedu” portrayed the smitten nayika who has lost her heart to Shiva with commendable abhinaya. Is it because you have both Ganga and Chandra on your person, that you are indifferent to me? As the cool moon stings and she burns in love, the nayika in the charanam speaks of how Manmatha plagues her with his flowered darts. The statement on “naagareegamaana tirunagaril” referring to the splendid home of the Lord could have been interpreted with more of the sculpturesque beauty of temples, than the fixation with the Lord in procession.

Dashavataram based on Jayadeva’s verses came off as a powerful item, each manifestation vividly brought out in the dance narration — moods helped by the ragamalika music in suitable modes like Kambodhi, Natakuranji, Shanmukhapriya, Attana, Mohanam, Hindolam, Sindhubhairavi, Madhyamawati, etc. Equally winsome and communicative was Rasaranjani depicting the Ashtanayika based on Narsing Mehta’s poetry describing the nayika in different situations of love as Abhisarika, Vasakasajja, Proshita Bhartrika, Khanditha, Vipralabdha, Virahot kanthita, Kalahantarita and Swadheenapatika — starting with the woman setting off to meet her beloved to the woman supremely confident of being the centre of her man’s heart. Expressive eyes, a mobile face and above all, inner involvement were patent right through Shivangi’s recital. The score by Ganeshan starting in raga Vasantha through various ragas smoothly ended in Shivaranjani with the tillana in Adi talam as the finishing point.

The fly in the ointment was the very poor attendance, with a very slender audience presence towards the end.