EC's decision to hold by-polls to three Lok Sabha seats in Karnataka on Nov 3 has come as surprise to most political parties. 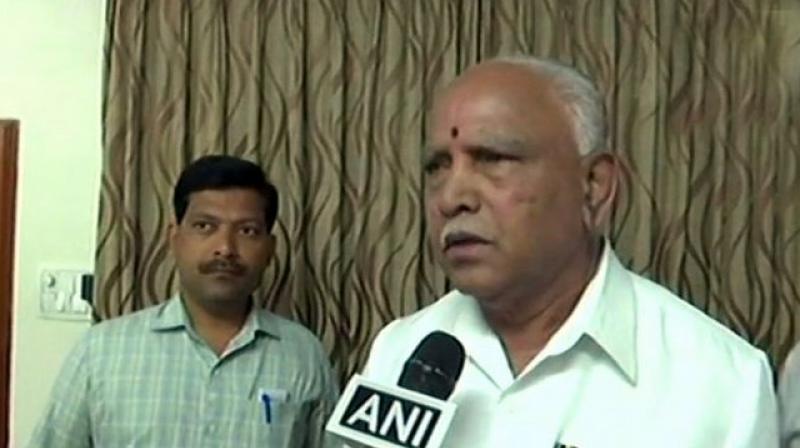 Karnataka BJP president BS Yeddyurappa said he was already in talks with party leaders about the selection of candidates and the names would be finalised in a couple of days. (Photo: File | ANI)

Bengaluru: The Election Commission's decision to hold by-elections to three Lok Sabha seats in Karnataka on November 3 has come as a surprise to most political parties who questioned the necessity for the exercise in view of the general elections due early next year.

Pointing to the short term of about five months those elected in the by-poll would have, Congress and BJP said the Lok Sabha elections would be held within five months.

Election Commission had on Saturday announced by-polls to Shivamogga, Ballari and Mandya and Ramanagara and Jamkhandi assembly constituencies will take place on November 3. The counting of votes will be on November 6.

The by-elections had been necessitated after BJP's BS Yeddyurappa (Shivamogga) and B Sriramalu (Ballari), and CS Puttaraju of JD(S) (Mandya) resigned as Members of Parliament on their election to the assembly in May last.

By-polls to Jamkhandi assembly seat was necessitated following the death of Congress lawmaker Siddu Nyamagouda, while Ramanagara fell vacant as chief minister HD Kumaraswamy gave up the seat and retained Channapatna, the other segment won by him in the assembly elections.

The parties welcomed the by-election to the assembly constituencies and said they would finalise their candidates even as JDS, heading the coalition government with Congress, appeared all set to field Kumaraswamy's wife Anitha in Ramanagara seat.

On a visit to Ramanagara Sunday, Anitha herself said she would contest from the segment.

Responding to questions from reporters, initially she indicated she would contest and asked them to wait for two days for official announcement.

However, faced with persistent questions, she said her candidature had been confirmed.

KPCC President Dinesh Gundu Rao said Saturday they were expecting the assembly by-polls because it was necessary since the House still has a term of four-and-half years, but questioned the need for holding elections to the three Lok Sabha seats.

Pointing out that the Lok Sabha was expected by March or April, he said we need to think about the need for this (by-poll)."

BJP state President BS Yeddyurappa on Sunday termed as "unnecessary" the by-election to the three parliamentary seats and said none of the parties in the state wanted it.

He, however, said the BJP candidates for the three seats and the two assembly constituencies would be finalised soon.

"Election Commission has decided it. Till the last moment we were under the impression that there will be no Lok Sabha by-poll. No party is interested, the former chief minister told reporters in Shikaripura. Whoever gets elected will be Member of Parliament for about just five months. After that we will have to face election once again. This was unnecessary. Don't know how the Election Commission has thought, but it is inevitable we will have to bow to its decision," he said.

Yeddyurappa said he was already in talks with party leaders about the selection of candidates and the names would be finalised in a couple of days.