India   All India  08 Oct 2017  Can fight war at 'short notice' in most befitting manner: IAF Chief
India, All India

Can fight war at 'short notice' in most befitting manner: IAF Chief

The comments came amid China's muscle flexing in the Doklam Plateau and continued cross-border terror activities by Pakistan in J&K. 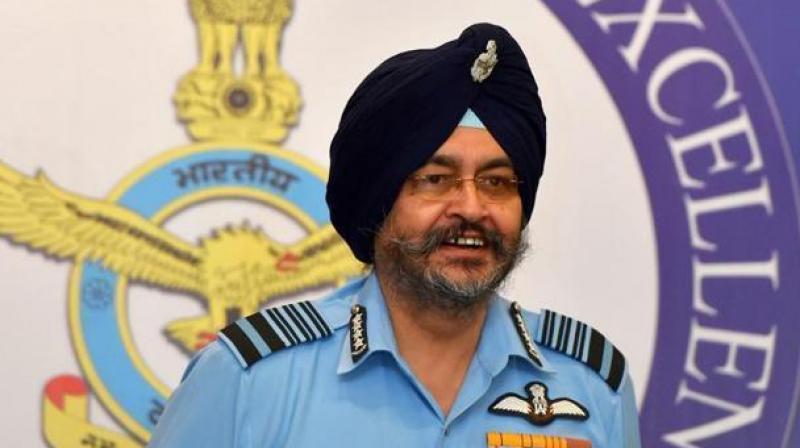 The IAF chief spoke on a variety of issues, including the possible security challenge facing the country, stating that the focus was to transform the IAF into a technology intensive force in the next few years to significantly enhance its overall prowess. (Photo: PTI/File)

Hindon (Ghaziabad): The Indian Air Force is prepared to fight a war at a "short notice" and fully geared up to respond to any security challenge to the country in the most befitting manner, Air Chief Marshal BS Dhanoa said on Sunday.

The IAF chief also said that the uncertainties in the present geo-political environment in the region may require the IAF to fight a "short" and "swift war".

"We are prepared to fight at a short notice should the need arise," he said while addressing an event at the air base here on the occasion of the 85th anniversary of the IAF.

The comments came amid China's muscle flexing in the Doklam Plateau and continued cross-border terror activities by Pakistan in Jammu and Kashmir.

The IAF chief spoke on a variety of issues, including the possible security challenge facing the country, stating that the focus was to transform the IAF into a technology intensive force in the next few years to significantly enhance its overall prowess.

"I assure my countrymen that these men and women under my command are confident to take on any threat and fully prepared to undertake full spectrum of air operation and respond to any challenge in the most befitting manner," he said, in the presence of Army Chief Gen Bipin Rawat and top echelons of the IAF.

Separately, in a message published in an IAF booklet, Dhanoa said the uncertainties in the current environment in the region may require IAF to act in varied challenging situations.

"The nature of conflict in the present geo-political environment may require us to fight a short and swift war for which we need to be alert and prepared to fight on a short notice," he said.

The IAF also presented an impressive parade with its jets and helicopters giving a glimpse of the force's lethal strike capability. Dhanoa also conferred Vayu Sena Medal to a number of IAF personnel.

In his address, Dhanoa also talked about the loss of lives of seven security personnel in the Mi-17 chopper crash in Tawang on Friday and said the IAF cannot afford to lose valuable lives and assets in accidents.

"Notwithstanding the high intensity of our flying, we cannot afford to have accidents and lose valuable lives and assets. Our losses during peace time is a cause of concern and we are making concerted efforts to prevent accidents and preserve our assets," he said.

Dhanoa said that after the terror attack on the Pathankot base, security has been significantly strengthened at all IAF bases to counter sub-conventional and other threats.

He also emphasised on the need to have joint planning and coordination among the IAF, the Army and the Navy to enhance the overall defence capability of the country.

"Indian Air Force is firm in its belief that joint planning and operations are the way ahead for which core competencies of each service must be synergised to generate desired effect and capability," he said.

The IAF chief also asked all air warriors to remain combat ready. "It is the duty of each one of us to remain combat worthy, whether on the ground or in the air, and also maintain our combat systems operational for any contingencies at a short notice."

Dhanoa paid a glowing tribute to Marshal of the Air Force Arjan Singh, who passed away last month, calling his demise a tragic loss for the force.

The IAF chief also highlighted IAF's acquisition programme and said setting up of a robust network centric operational capability is nearing its goal.

"We are in the process of acquiring new combat systems, upgrading and modernising our existing inventory of aircraft and weapons system with an aim to equip them with the latest avionics technology," he said.

In this regard, he also mentioned the mid-life upgradation of various fighter jets, including the Mirage 2000, the MiG-29 and the Jaguar fleet.

"The acquisition of 36 Rafale aircraft in the next few years and an early decision on the indigenous fighter jet project will significantly enhance our operational capability," he said.

Dhanoa said IAF is fully committed in supporting indigenous development of high-technology military equipment in consonance with the 'Make in India' programme of the government.

"The induction of the advanced light helicopter, Aakash surface-to-air guided weapons, air-to-air Astra missiles and air defence radars are some of the success stories of defence indigenisation," he said.