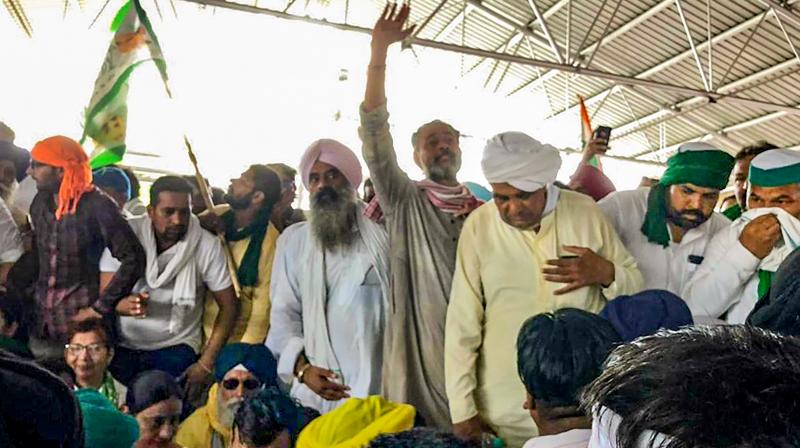 New Delhi: Locked in a showdown with Haryana’s BJP-led government, a large crowd of farmers squatted at the gates of the Karnal civil headquarters on Tuesday in protest over a lathicharge last month. The police also used water cannons to stop the farmers from marching towards the district’s mini-secretariat after talks broke down between their leaders and the district administration on their demand for action against officials and police officers involved in the lathicharge.

As the protesters seemed to settle in for the night, the farmer unions’ leaders said the gherao will continue till their demands are met. “The gherao of the mini-secretariat has started. We will sit here peacefully. Despite all obstacles, we have gheraoed the mini-secretariat,” Samyukt Kisan Morcha (SKM) leader Yogendra Yadav announced later.

The gherao began in the evening, hours after farmers from Haryana and the neighbouring states reached Karnal’s New Anaj Mandi for a maha-panchayat. Marching on foot from the mahapanchayat venue to the mini-secretariat 5 km away, the farmers faced water cannons as they neared the complex. They jumped over some barricades, but there was no other serious confrontation with the police along the way.

In New Delhi, the Congress said Haryana CM Manohar Lal Khattar must resign if he cannot talk with the protesting farmers. Congress spokesman Randeep Surjewala said Prime Minister Narendra Modi “should shed his ego and arrogance and withdraw the three black laws” over which the farmers have been protesting for several months.

The protest was organised by the SKM against the lathicharge at Bastara toll plaza on August 28. Several farmers and police personnel had been injured in the incident and protesters claimed one farmer had died due to the assault.

As farmers gathered at Anaj Mandi, an 11-member delegation was called by the local administration to discuss their demands in a bid to dissuade them from marching towards the secretariat. Deputy commissioner Nishant Kumar Yadav, Karnal IGP Mamta Singh and SP Ganga Ram Punia were among the officials who took part in the talks with the farm union leaders.

During the two-hour talks, the union leaders insisted that an FIR be filed against IAS officer Ayush Sinha, who was the subdivisional magistrate during the police lathicharge. A video that circulated afterwards showed Mr Sinha asking the policemen to “smash the heads” of the protesters breaking down the barricades.

Soon after the talks failed, the union leaders decided to continue with their decision to gherao the mini-secretariat. They also appealed to the protesters not to indulge in any law and order disruption and in case the police tried to stop them, they should court arrest. On their way to the secretariat, some protesters also removed some barricades.

“The Karnal administration doesn’t want to listen to us farmers. Either the Khattar government must heed our demands, or they should arrest us. We are willing to court arrest,” Bharatiya Kisan Union leader Rakesh Tikait said in a tweet after the talks broke down.

“Our talks with administration failed as they did not agree to our demands,” senior farm leader Joginder Singh Ugrahan said before the leaders decided to go ahead with their original plan to gherao the mini-secretariat.

Mr Yadav tweeted: “Like Kauravas’ refusal to part with just five villages, the Khattar government did not even accept the minimum demands of the farmers. The government’s obstinacy has thwarted three rounds of talks.”

As the farmers marched on to the secretariat, the police briefly detained some protesters and even used water cannons to push them back. Mr Yadav tweeted that the police had detained farm union leaders briefly but said later that they were all released soon.

Addressing the mahapanchayat earlier, Mr Yadav said: “We have come to ask the government which Constitution, which law gives an IAS officer permission to give orders to break the farmers’ heads… Under which law are the police allowed to carry out a brutal lathicharge, resulting in the death of one and injuries to several others.”

The authorities have, however, denied that any farmer died due to the violence on August 28. The Haryana police had that day lathicharged a group of farmers disrupting traffic on the national highway while heading to the venue of a BJP meeting. Over 10 protesters were injured.

The SKM had said a murder case should be registered against IAS officer Ayush Sinha over his alleged “break heads” remark. Mr Sinha, who was later transferred in a reshuffle, also involving some other IAS officers, has now been posted as the additional secretary in the Citizen Resources Information Department.

A day ahead of the mini-secretariat’s proposed gherao, Central forces were deployed, mobile Internet services suspended and prohibitory orders banning gatherings had been imposed in Karnal. Despite this, a sea of farmers and other protesters carrying flags and placards poured through Karnal's streets to reach the Anaj Mandi for the mahapanchayat.