India   All India  08 Sep 2018  Save Western Ghats from demolition men
India, All India

Save Western Ghats from demolition men

In 2011, the committee had advised a total ban on mining and quarrying in the ecologically sensitive zones of the Western Ghats. 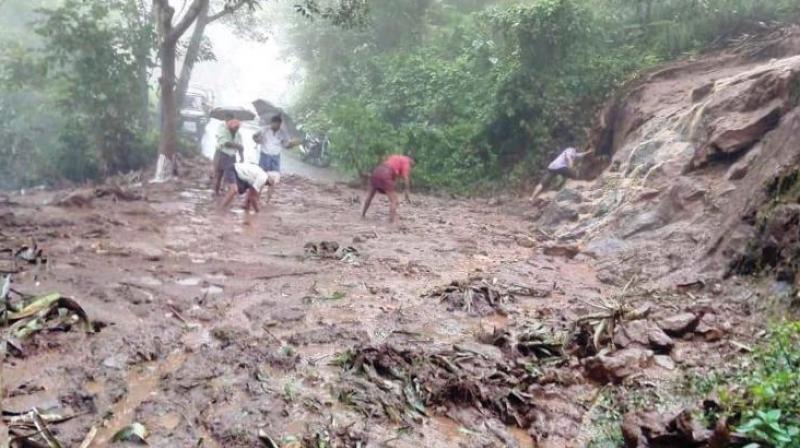 Some had even remarked that the occurrence of landslides in deep forests during this period indicates that quarrying has nothing to do with the phenomenon. This stupidity was mouthed by quarry owners and repeated their well-wishers in Kerala Assembly. (In pic: A scene of landslide in Idukki)

Rebuilding Kerala cannot take off without implementing the salient recommendations of the Prof Madhav Gadgil committee though some of its members, of late, seemed to ignore the five-year deadline set for stopping mining and quarrying in the fragile Western Ghats.

In 2011, the committee had advised a total ban on mining and quarrying in the ecologically sensitive zones of the Western Ghats. Quarries had to be phased out in five years (by 2016). Now, two years past the deadline, thousands of quarries and mining centres are in operation. Reports indicate that at least 5,000 quarries, both legal and illegal, operate in the Western Ghats. It appears 60 percent of them are illegal. Some of them are run by politicians, a few them members of the Legislative assembly, or their friends and relatives. It is a real cash cow as blasting of rocks assures stupendous sums easily.

The disaster of tremendous magnitude that struck Kerala in August in the form of the continuous downpour resembling a cloudburst and flooding was totally unexpected but such occurrences were predicted by the Western Ghats Ecology Expert Panel (WGEEP), headed by Prof Gadgil.

WGEEP had designated entire the Western Ghats as ecologically sensitive. The entire stretch was subdivided into three zones according to the degree of sensitivity of the fragile region. New mining and quarrying licences were a strict “No, No”. Prof Gadgil insisted on ending all illegal mining and quarrying forthwith. But wily politicians, with eyes fixed on votes, shelved the Gadgil report. Then followed the Kasturirangan report (High Level Working Group), whittling down areas of ecologically sensitive zones to a considerable extent.

WGEEP declared that the fragile Western Ghats is a biological treasure trove of endangered life and needs to be protected and revived. The stretch hosts a rich repertoire of endemic species and aesthetic scenery. The committee recommended the conservation of water resources and a switch to organic practices. The construction of roads and others facilities had to be undertaken only after studying environmental consequences.

These recommendations were based on an extensive survey that took several months of painstaking field work. But the Kasturirangan committee formulation was the outcome of deskwork, carried out with the help of satellite pictures. There was panic when everybody realized that landslides, landslips and other damage are the result of man’s plunder of the pristine Ghats.

Heavy rains flooded river basins and its impact was compounded by reckless construction along riverbanks. Watersheds, ponds and farmlands were flattened for construction activities. When the floodgates opened, constructions on riverbanks were submerged or swept away. The anomalously large quantity of rainfall compelled engineers to open the dams lest they should burst, wreaking greater havoc.

There is a tendency to find fault with dam management and dam safety practice. Such allegations hide the actual problem faced by the state. Floods are vastly wrought by manmade damage to the environment. Mining and quarrying weakened the terrain, triggering landslides and landslips.

Some had even remarked that the occurrence of landslides in deep forests during this period indicates that quarrying has nothing to do with the phenomenon. This stupidity was mouthed by quarry owners and repeated their well-wishers in Kerala Assembly.

Now is the time to revisit the Gadgil committee recommendations and revise and tighten measures to protect the fragile Ghats. The State as a whole is an ecologically sensitive area and it is essential conduct an unbiased and detailed study of the area to minimize hazards in future.

Rivers dried up within days of the flooding and water level in wells dipped. Mining rivers for sand, filling up watersheds and agricultural land for construction activities and waste dumps in rivers have caused this phenomenon.

There has been an alarming spurt in the acidic level of available fresh water in Kerala from the seepage of pesticides and fertilisers into rivers and water bodies during the floods. This indicates the degree of environmental damage caused to the State, which accounts for a mere 1.18 per cent of the peninsular landmass.