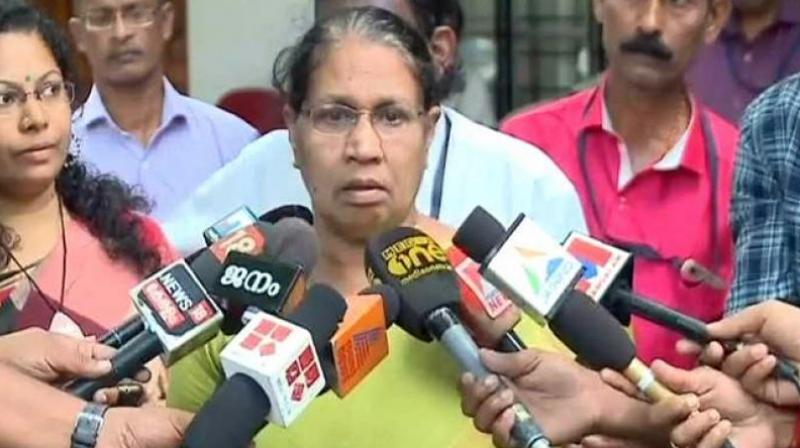 Kerala women's panel chief MC Josephine made it clear that it cannot register a case on its own. (Photo: ANI)

MLA from the Shornur constituency and leader of the ruling party in Kerala PK Sasi has been accused of sexually harassing a woman leader of the Democratic Youth Federation of India (DYFI).

"We are all human beings, mistakes do happen. People inside the party may also have committed such mistakes," Kerala State Women’s Commission Chairperson MC Josephine said on Thursday.

The state women’s panel made it clear that it cannot register a case on its own despite the National Commission for Women taking note of the incident wrote to Kerala police to investigate the matter. "We have not got any complaint. Even for suo moto case, we need at least the basic details like the nature of complaint which could be revealed either by the media or the victim themselves, in this case that hasn't happened. Then how can we register a case," Josephine said.

Apprising of the development, NCW had tweeted, "The Commission is deeply disturbed with such alleged conduct on part of the elected representative. NCW has written to the Director General of Police and State Police Chief, Kerala giving directions that the matter is investigated. NCW has also directed him to apprise the Commission about the action taken in the matter and ensure speedy delivery of justice to the victim."

The opposition BJP in Kerala accused the ruling CPI(M) of trying to hush up the matter. BJP MLA from Kerala V Muraleedharan said the women's commission had become a 'mute spectator'.

The woman had sent the complaint to CPI(M) politburo member Brinda Karat on August 14 and e-mailed a copy of it to party general secretary Sitaram Yechury.

On September 7, the CPI(M) issued a statement on the issue and said the party will take appropriate action in the matter. It further accused the Congress, Bharatiya Janata Party (BJP) and a section of the media of making baseless allegations in order to defame the party.

The statement added that the CPM state committee received a complaint against party MLA on August 14 following which an enquiry was ordered into the matter.

"CPM state secretary Kodiyeri Balakrishnan has heard the statement of the lady. Later, P K Sasi, MLA whose name was mentioned in the complaint was called to AKG center and heard his version about the complaint. State secretary explained all this in the first state secretariat meeting held on August 31. The meeting unanimously decided to conduct detailed enquiry on the lady's complaint.. Soon after receiving their report, party will take appropriate action on this issue," the party said in the statement.

The CPI(M) further said that it will take a decision according to the party constitution, dignity and moral values. "CPM have taken strong stand on ensuring women safety and preventing tag atrocities against women in all time. Party has taken stubborn stand on rare occasions when raised some complaints insulting women," it stressed.

PK Sasi has described the complaint as a "well planned conspiracy" to malign his reputation.