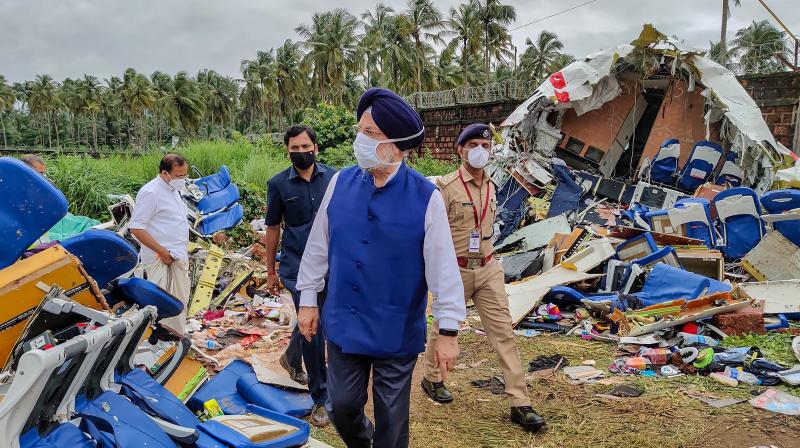 Kozhikode: The black box of the ill-fated Air India Express flight that crashed at the Kozhikode airport in Kerala has been recovered even as the toll in the Friday nigh disaster rose to 18 with another passenger succumbing on Saturday.

The Air India Express flight from Dubai, with 190 people on board, overshot the tabletop runway at the airport while landing in heavy rain and fell 35 feet down a slop and broke into two.

Investigations into the cause of the mishap are underway with top officials of the airlines and aviation regulator DGCA rushing here.

As authorities launched investigations into the crash, Union civil aviation minister Hardeep Singh Puri arrived in Kozhikode to take stock of the situation and implementation of relief measures.

An official of the Directorate General of Civil Aviation (DGCA) said the DFDR and CVR are with the Aircraft Accident Investigation Bureau and will be sent to Delhi for further investigation.

Puri announced Rs 10 lakh interim relief for each of the deceased, Rs 2 lakh for those seriously injured and Rs 50,000 for those who suffered minor injuries.

Malappuram district collector K Gopalakrishnan said one more passenger succumbed to injuries, taking the toll to 18. Barring one, all those who had perished in the accident have been identified, he told reporters.

The condition of 16 passengers among 149 those admitted to various hospitals, was serious, he said.

Amid the tragedy, a coroanvirus scare has  surfaced with samples of one of the passengers who died in the mishap testing positive for the pathogen. Kerala health minister K K Shailaja has asked all those who took part in the rescue operation to go on self-quarantine as a precautionary measure and get themselves tested.

Air India Express said four crew members of the flight were safe, while the employees union of the low-cost air carrier said they were under treatment in hospital for injuries.