Maneshinde, however, did not say when the note was written or if it was handed over to the Mumbai police 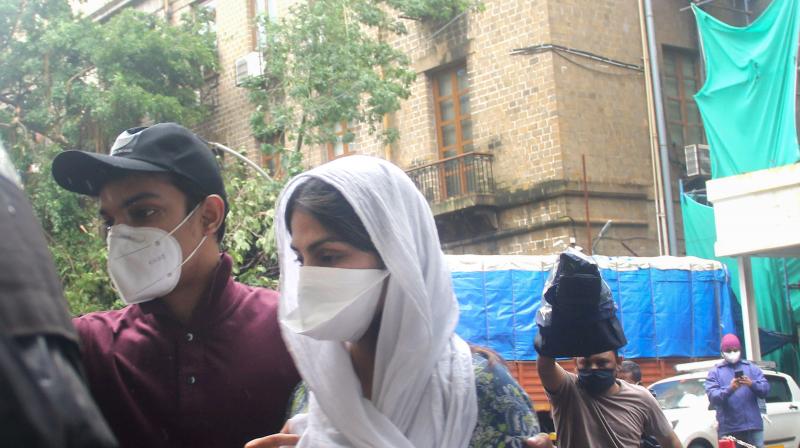 Mumbai: A day after she was grilled by the Enforcement Directorate (ED) for alleged money laundering in Sushant Singh Rajput case, his girlfriend and actress Rhea Chakraborty on Saturday shared a picture of a note which she claims was written by the late actor expressing his gratitude for certain things in his life.

Chakraborty (28) also shared through her advocate Satish Maneshinde a photograph of a water sipper, which is a piece of movie merchandise from Rajput's 2019 film "Chhichhore".

"The only property of Sushant that I possess," she said in a message sent along with the photo to the media.

The other picture shows a page of a notebook titled "Gratitude List" with seven serial numbers.

In her message shared by Maneshinde, Chakraborty stated, "And this is his (Rajput's) handwriting...Lillu is Showik (Chakraborty's brother), Bebu is me, Sir is my dad, Ma'm is my mom and Fudge is his dog".

Maneshinde, however, did not say when the note was written or if it was handed over to the Mumbai police which had registered an Accidental Death Report (ADR) after Rajput's death in June this year.

The actor (34) was found hanging at his residence in suburban Bandra on June 14.

His father K K Singh on July 25 lodged a complaint with the Bihar police against Chakraborty, her parents Indrajit and Sandhya Chakraborty, her brother Showik, her former manager Shruti Modi and one Samuel Miranda, who Chakraborty had employed as the manager in Rajput's house.

Based on the complaint, the Bihar police registered an FIR against the accused persons and booked them under various sections of the Indian Penal Code including abetment to suicide, criminal conspiracy, cheating and wrongful confinement.

K K Singh had also alleged financial irregularities in Rajput's bank accounts and properties, and claimed that Rs 15 crore was siphoned away from his accounts.

The ED had on July 31 registered a case of money laundering against the Chakrabortys and others.

Chakraborty had moved the Supreme Court seeking transfer of the FIR registered against her from Patna to Mumbai.

The Bihar government had earlier this week recommended the probe in the Rajput death case to the Central Bureau of Investigation (CBI).