Robert Vadra advised social media users to respect the emotions of people in Jammu and Kashmir instead of making fun of the situation. 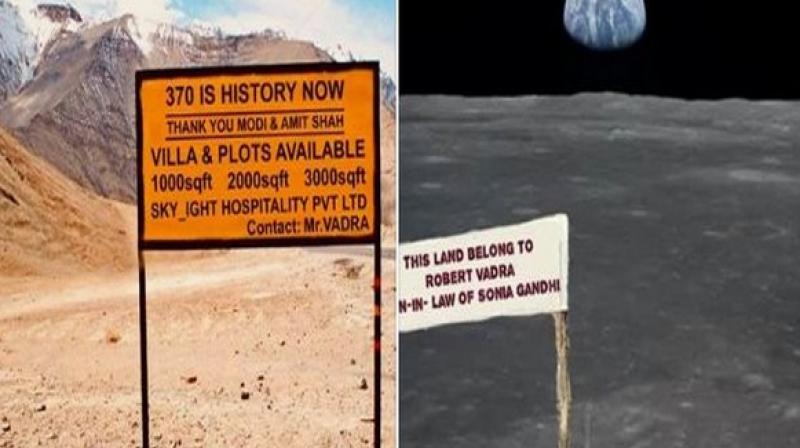 After removal of Jammu and Kashmir's special status people from the rest of the country can now buy land there, which is what the memes are based on. (Photo: ANI)

New Delhi: As soon as Article 370 was revoked by Centre and Jammu and Kashmir was converted to a Union Territory, several memes flooded social media. But it seems that few of them didn't go down well with Robert Vadra, businessman and husband of Congress leader Priyanka Gandhi.

Expressing his discomfort over memes featuring his name and photos, Robert Vadra, who is facing probe in land-grab cases, on Thursday advised social media users to respect the emotions of people in Jammu and Kashmir instead of making fun of the situation.

After removal of Jammu and Kashmir's special status people from the rest of the country can now buy land there, which is what the memes are based on.

"What's the obsession, with me?" Vadra questioned trollers. "I'm glad I have a good sense of humour," he asserted.

"But sensitive issues affecting the people, who bear a life-changing dynamic from States to Union Territories, must be respected, with their emotions too. All the citizens of our country are equal," Vadra, who is a son-in-law of UPA chairperson Sonia Gandhi and brother-in-law of Congress leader Rahul Gandhi, wrote on Facebook.

He posted the message along with four memes. In meme one, a notice board reads, "370 is history now. Thank you, Modi and Amit Shah. Villa and plots available. SKY_IGHT Hospitality Pvt Ltd. Contact Mr Vadra."

While meme two, showing the moon and with a board which reads, "This land belongs to Robert Vadra, son-in-law of Sonia Gandhi."

Meme three shows Prime Minister Narendra Modi and Union Home Minister Amit Shah talking to each other, saying "Article 35A hataane ke liye hum excited the par humse bhi zyada koi aur excited tha (We were excited to remove Article 35A but someone else was more excited than us)". It referred to Vadra as the person who was eager for the change.

Robert Vadra is currently facing probe in connection with cases of alleged land-grabbing in Delhi-NCR and Bikaner, besides the purchase of a property in London.