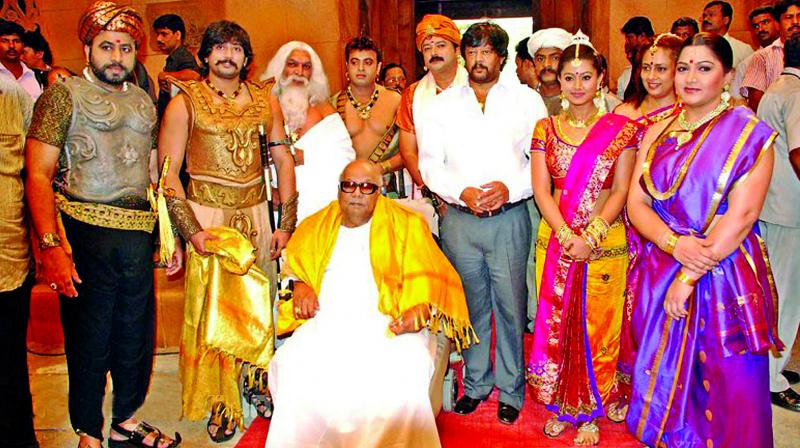 Chennai: At a time in when Tamil cinema was churning out films revolving around mythology, folk tales, folk myths, and literature genre in the 40s, it was Kalaignar Karunanidhi who brought out a sea change with his  social themed writings.
In Tamil Nadu, cinema has not only been viewed as an art form but also it has been imbibed in people’s emotions. The culture of worshipping reel heroes as real life heroes still continue in Tamil Nadu. When many used cinema as a platform to gain entry into politics, it was DMK supremo Karunanidhi who understood the real power of cinema and revolutionized it with his powerful writings. With his command over Tamil language, he became popular with his novels, poetry and letters. Later he tried his hands in writing stage plays and screenplay for films.

RAJAKUMARI -1947
He worked for a while at Salem’s Mercury Studios for a monthly salary. Karunanidhi moved to Chennai and joined Jupiter Studios in1946. There he got the biggest opportunity to write screenplay for a film Rajakumari, which was MG Ramachandran’s(MGR) first film as the lead hero. It was his distant relative and ace musician C.S. Jayaraman who recommended Karunanidhi to Jupiter Somu. The 1947 blockbuster, which was a turning point for both Kalaignar and MGR was directed by ASA Sami. The duo became close associates on and off screen. 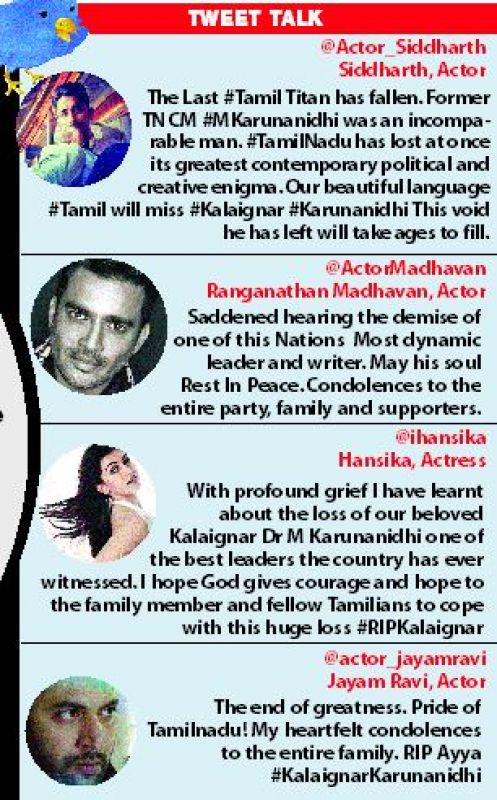 ABHIMANYU (1948)
It was Karunanidhi’s second film with Jupiter Pictures. And it was said he received three-digit salary for his power packed poetic epilogs in Abhimanyu, a mythological. There is a funeral oration by MGR who played Arjuna after the death of his son in the battle. There he address Abhimanyu as ‘Anbu Tamizh Magan’ (Beloved son of Tamil soil), thus changing Mahabharata, which was till then associated as North-based epic into Dravidian lore.

Manohara is yet another cult film written by Karunanidhi starring Sivaj Ganesan, which catapulted the actor to dizzy heights.

Malaikallan, which featured MGR was a ‘superhero’ subject where he robs from the rich and helps the poor, established the actor as a box -office hero. It also gave him an image of a do-gooder in real life. Yet another film Manthiri Kumari, which gave MGR a big breakthrough.

In his 64-year career in the film industry as a scriptwriter, screenwriter, dialogue writer, Karunanidhi has written screenplay for 69 films. Some of his earlier popular movies include Marutha Naattu Ilavarasi, Parasakthi, Thirumbipaar, Manohara, Malai Kallan, Rangoon Radha, Raja Rani, Puthaiyal, Kanchi Thalaivan, Poompuhar and his recent being pen Singham in 2010, Ilaignan in 2011 with the last Tamil film being Prashanth starrer Ponnar Shankar in 2011.

The 1997 film Iruvar directed by Mani Ratnam featuring Mohan Lal, Prakash Raj, Aishwarya Rai and Tabu is based on his relationship with MGR. 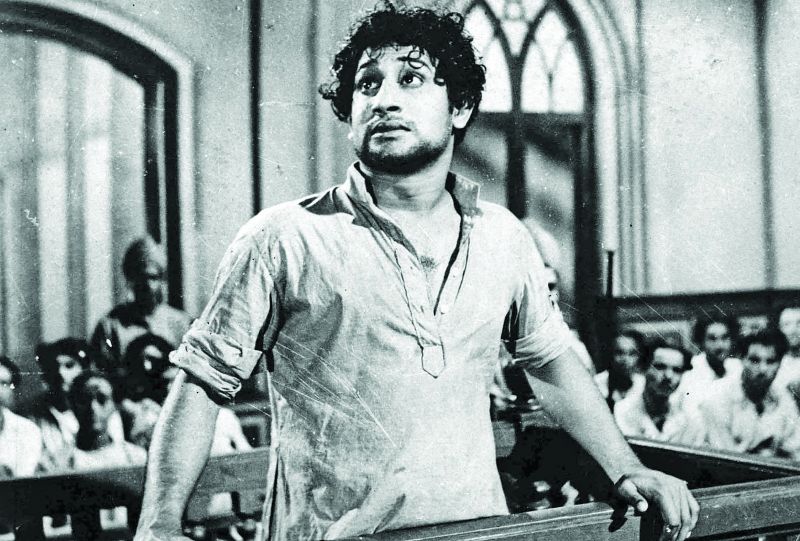 Parasakthi, a film oriented to social reform, which Karunanidhi screen played besides penning the dialogues, marked the cinematic acting debut of Sivaji Ganesan, one of the finest actors of Tamil cinema. The film touched upon a lot of reformist ideas of Dravidian movement like the expatriate Tamils, corruption, superstitious beliefs, wisdom and social evils The lengthy climax court scene where the hero lashes out on society for the irrational beliefs and practices was an evergreen moment in Tamil cinema. The movie was initially banned and later released in 1952. The popularity of his movie dialogues made Karunanidhi a star in his own right.