India   All India  08 Aug 2018  Pall of gloom descends on native village of Karunanidhi
India, All India

Pall of gloom descends on native village of Karunanidhi

Villagers turned up in large numbers to pay floral tributes at a portrait of the DMK patriarch at his house in Thirukkuvalai. 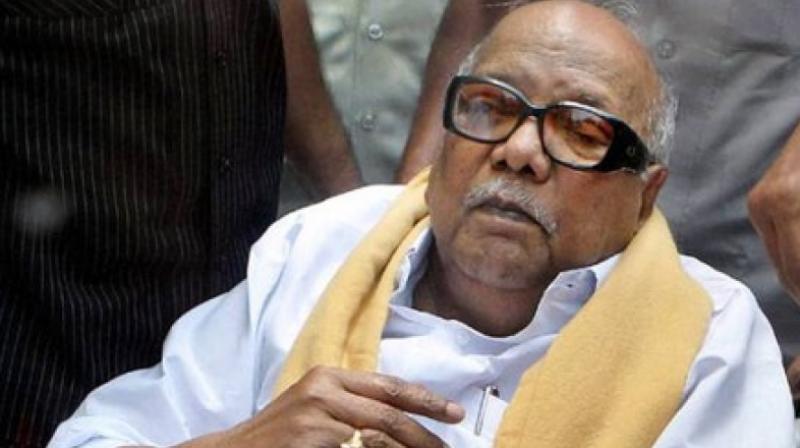 The 94-year-old leader, a five-time chief minister of Tamil Nadu, breathed his last at Kauvery Hospital in downtown Chennai at 6:10 pm on Tuesday. (Photo: File | PTI)

Nagapattinam: A pall of gloom descended on Thirukkuvalai, the native village of former Chief Minister M Karunanidhi in the district, as soon as the news of his death trickled in, with people turning up in large numbers at his ancestral house.

Villagers paid floral tributes at a portrait of the DMK patriarch at his house.

Karunanidhi was born on June 3, 1924 in the village and spent his childhood here. Situated in the heart of the village, his ancestral house -- a modest blue and white structure -- now houses a statue of his mother and two libraries named after his parents -- 'Muthuvelar Noolagam' and 'Anjugam Padippagam'.

A huge collection of rare photographs of a young and vibrant Karunanidhi in various poses adorn the house now.

Karunanidhi received his primary education in the Panchayat Union Middle School at the village. He ordered setting up of a primary health care centre and an industrial training institute at the hamlet, besides upgrading the facilities at his alma mater. When he served as the chief minister during 2006-11, Karunanidhi visited the village twice. His last visit to the village as chief minister was in 2009.

The name 'Karunanidhi' is the pride of this tiny village and in his passing away, its residents feel that they have lost their identity.

The 94-year-old leader, a five-time chief minister of Tamil Nadu, breathed his last at Kauvery Hospital in downtown Chennai at 6:10 pm on Tuesday after waging a grim battle for life for 11 days.