India   All India  08 Aug 2018  In a first, Parl adjourns to pay tribute to Karunanidhi who was never an MP
India, All India

In a first, Parl adjourns to pay tribute to Karunanidhi who was never an MP

Both Houses of Parliament were adjourned for the day today after paying obituary to DMK chief M Karunanidhi who passed away on Tuesday. 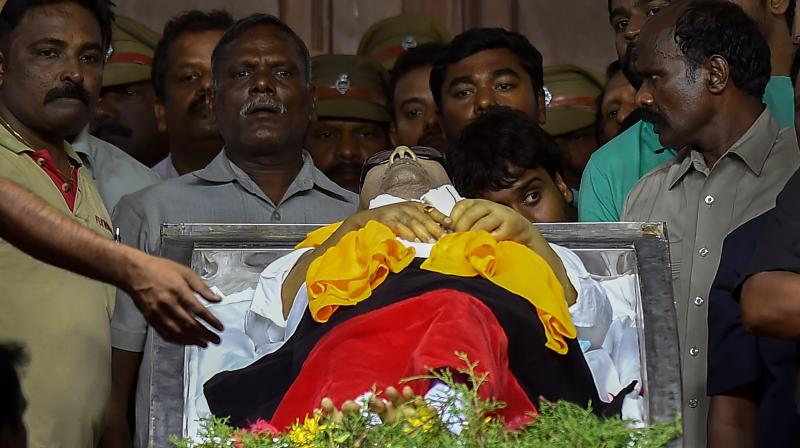 New Delhi: Both Houses of Parliament were adjourned for the day today after paying obituary to DMK chief M Karunanidhi who passed away on Tuesday.

As soon as the Lok Sabha met for the day, Speaker Sumitra Mahajan informed members of the demise of Karunanidhi (94). Describing him as a "visionary" and a "leader of the masses", she said he spread his political philosophy through screenwriting and produced some of the best hits in Tamil cinema.

After observing a moment of silence in his memory, Lok Sabha proceedings were adjourned for the day.

In Rajya Sabha, Chairman M Venkaiah Naidu, reading out an obituary reference, described Karunanidhi as a multifaceted personality and a gritty figure who overcame difficulties. Beginning his career as a screenplay writer, Karunanidhi used Tamil cinema to propagate Dravidian ideology and contributed to Tamil culture, he said.

Karunanidhi entered politics at a very young age and was a member of the Tamil Nadu Assembly for a record 13 times, being elected from seven different constituencies, he said.

In 1969, he became the third Chief Minister of Tamil Nadu and went on to serve the state as its head for five terms. He played a key role in scripting development of Tamil Nadu, Naidu said, adding in his death the country lost an eminent litterateur, an able administrator, a dedicated social worker and an outstanding statesman.

Members stood in silence as a mark of respect to the departed soul. Naidu then adjourned the proceedings for the day.

Referring to Karunanidhi as one of the tallest leaders of the country, all members spoke in favour of adjournment of proceedings of the House as a mark of respect to the departed leader, they said.

Parliamentary Affairs Minister Ananth Kumar said the government was also in favour of adjournment and the same was conveyed to the Lok Sabha Speaker as well. He, however, sought the cooperation of all parties in both Houses in passing important pending Bills like the one relating to Prevention of Atrocities against SCs and STs in the Rajya Sabha and if required by dispensing with the Zero Hour and private members bills, they said.