A development economist, formerly with the Bill & Melinda Gates Foundation and the World Bank. 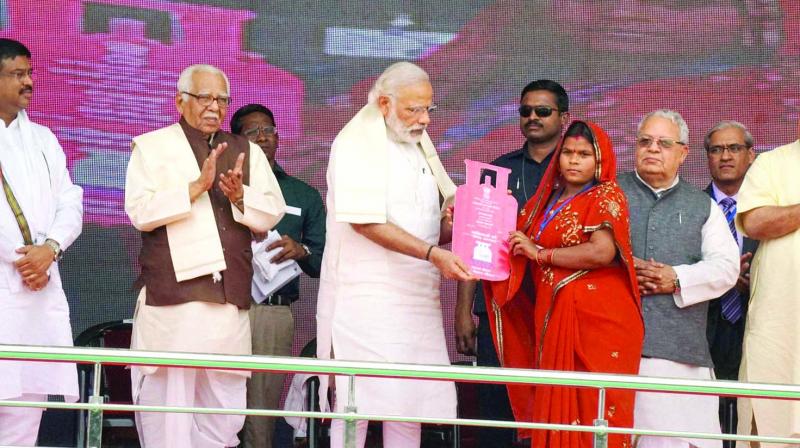 Prime Minister Narendra Modi presents cooking gas connection to a woman of a Below Poverty Line family during the launch of the Pradhan Mantri Ujjwala Yojana in Ballia on May 1, 2016 (Photo: PTI)

How often do you hear any government saying, “we’ve done it, yet again!” PM Modi may say this to 125 crore Indians in his Independence Day speech this year!

This is in response to his government achieving the target of Ujjawala scheme that was started on May 2016 with the aim of providing free LPG connections to 50 million poor households by March 31, 2019.

But the target has been met ahead of time. Earlier this year, the government had achieved the target of electrifying all the un-electrified villages within 1000 days of PM Modi making this announcement.

Times have changed indeed. Not only has the Modi government been steadfastly focused on development issues, it has also been result-oriented as is evident from the ambitious targets it has set for itself: doubling of farmers’ income by 2022, housing for all by 2022, establishing 150,000 health and wellness centers by 2022, eliminating Tuber-culosis by 2025, generating 225 gigawatts of electricity from renewable sources by the year 2022, and so forth.

Moreover, the government is serious about these targets which means that there are action plans, monitoring mechanisms and proposals for budgetary provisions in place for achieving these targets. Clearly, on the development front at least, what the Modi government has been doing is much different from what we’ve known or seen in the country. It is truly unprecedented! Nevertheless, an economist in me has several questions to seek answers to. For example, if the development issues to which the government has accorded top priority are indeed the most burning challenges facing the country today? If the solutions chosen for solving specific development problems such as connecting villages through electricity grid or providing LPG as cooking fuel and so forth are indeed the best available options from the perspective of affordability and emerging technological solutions?

If the government is not squandering the limited government capacity on a narrow range of issues, to the detriment of other, equally important issues? If the chosen interventions are being implemented efficiently and effectively? These are some of the questions that the Opposition parties should actually be raising and probing, if they were really serving the role of the Opposition effectively. Unfortunately, not. Prob-ing these questions require a strong economic research base as well as keen interest to play an effective Opposition role.

It has sown the seeds of development far and wide hoping that some of them would germinate, mature, and bear fruits. It is not clear, though, to what extent the government has been trying to strike a balance between multiple goals: between achieving the equity goal, on the one hand, and the goal of efficiency and growth on the other or between shorter-term and longer-term goals. In practice, prioritisation of development issues does not strictly follow the economic logic and is often guided by several practical considerations.

Moreover, fast-paced development comes at some expense. After all, if one is driving beyond the “sweet spot” that delivers optimal mileage, one needs to tolerate some inefficiency or waste.

Further, the sheer scale of implementation means that any scheme/program pan-India will take time to implement. So, implementation lags do, and will, happen and it is quite normal in the business of development.

Coming into power at a time when people’s trust in government had probably touched its lowest, the Modi government was confronted with the overarching challenge of restoring peoples’ trust.

Through anti-corruption and pro-development strategy, the Modi government has tended to re-establish this trust. Defining development targets and achieving those targets on time is a part of the strategy to establish credibility of the government.

By achieving tangible, substantive targets, the Modi government is signalling that it is not just all talk and no action. In fact, its talk is solidly based on actions and results on the development front.