India   All India  08 Aug 2018  2 dead in stampede near Rajaji Hall where late Karunanidhi lies in state
India, All India

MK Stalin said, 'Those who are in power are trying to create chaos, but you have all shown the strength of the cadres.' 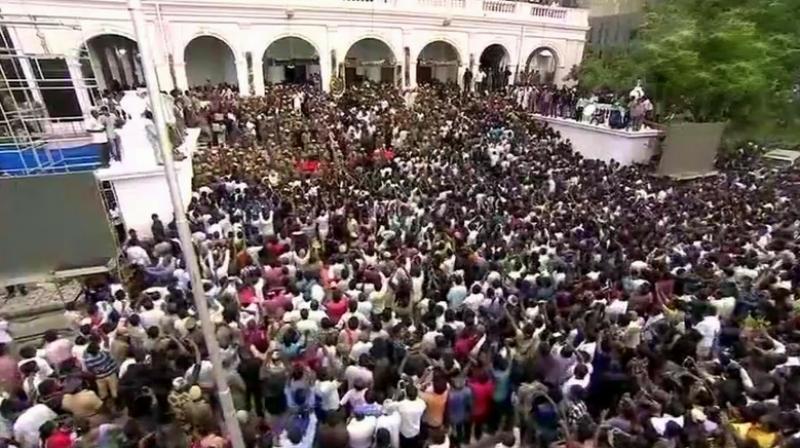 Several people have suffered injuries in the stampede that happened when the police were allowing them to enter the Rajaji Hall in batches. (Photo: Twitter | ANI)

Chennai: At least two people were killed and 33 injured after a stampede broke out at Rajaji Hall in Chennai where the mortal remains of DMK patriarch M Karunanidhi are kept for public to pay last respects.

According to reports, several people have suffered injuries in the stampede that happened when the police were allowing them to enter the hall in batches.

A scuffle also broke out between the Tamil Nadu police and Karunanidhi supporters who have thronged Rajaji Hall in large numbers to get a glimpse of the late leader whose body is kept in a glass casket.

Stalin said, "I did not want anything for myself. All I want is a fitting tribute to Kalaignar."

"Those who are in power are trying to create chaos, but you have all shown the strength of the cadres. I appeal to everyone to maintain peace," he added.

DMK supremo and five-time chief minister of Tamil Nadu, M Karunanidhi, died at Kauvery hospital in Chennai on Tuesday following a prolonged illness. He was 94.

The last journey of Karunanidhi from Rajaji Hall to Marina Beach is expected to begin at 4 pm today.