Beneficiary farmers have reason to rejoice because the increase in crop production has led to a 3 to 4-fold increase in their incomes as well. 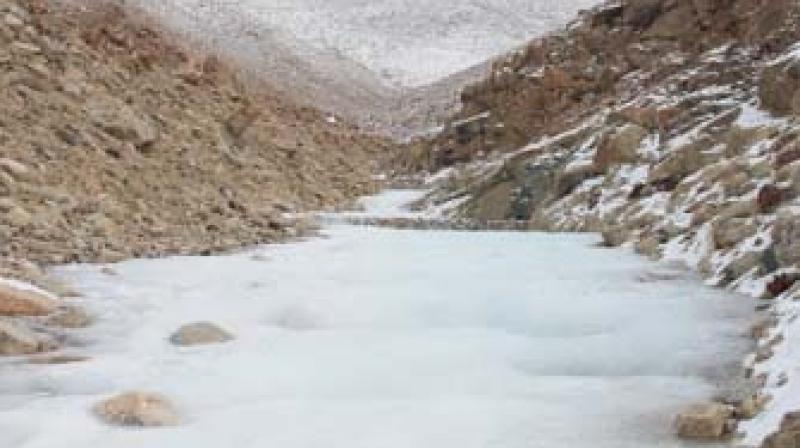 This first round of irrigation is very critical for farming operations in Leh as it facilitates timely sowing and gives full scope of cropping in the short growing season.

While fleets of tourists celebrate Leh’s stunning landscapes and commend its remarkable natural beauty, locals mourn the absence of a basic survival need which is easy access to water. For decades, communities in the water-starved villages of Leh like Nang, Takmachik, Igoo, and Umla have been competing for water, for both domestic and irrigational purposes.  With the lack of water, farmers in many more such villages perpetually face challenges in this harsh ecosystem.

Leh, India’s second largest district, is situated at a height of 2,900-5,900 metres. Seventy-seven 77 per cent inhabitants of this high altitude cold desert are thinly spread across 112 villages. This water crisis demanded an immediate and long-term, sustainable conservation plan — one that could recognise the local ecological and geographic challenges, and enable a positive impact on the sustenance of these communities.

After much deliberation with multiple stakeholders, Leh’s solution arose from the grit and determination of the village inhabitants who recognised the dire need to save their farms and families from water scarcity. Powered by the planned support and resources, artificial glaciers were constructed by local communities in partnership with experts like Mr Chewang Norphel at gruelling altitudes by placing stone bunds in suitable parts of streams to obstruct the flow of water, enabling ice formation. Glacier formation resulted from freezing of accumulated ice along such bunds on the mountain slopes.

The four villages strengthened their naturally existing glacier systems by facilitating construction of check dams in the selected streams, and at altitudes lower than the natural glaciers. Being at lower altitudes, snow in the bunds starts melting early thus ensuring a quick first round of irrigation for the villages in the month of April. This first round of irrigation is very critical for farming operations in Leh as it facilitates timely sowing and gives full scope of cropping in the short growing season.

In addition to unifying communities that once competed over water, the development plan supported environment-friendly techniques to increase the yield of crops during farming season, also increasing household incomes for many by allowing them to retain their source of livelihood: livestock rearing.

Beneficiary farmers have reason to rejoice because the increase in crop production has led to a 3 to 4-fold increase in their incomes as well. The pro-active approach by villagers to resolve the water crisis in Leh has revolutionized cost-effective and innovative ways to conserve water in high-altitude regions, making this model a realistic framework to combat similar issues in the future through situation-specific interventions that are also ecologically and socially sensitive.