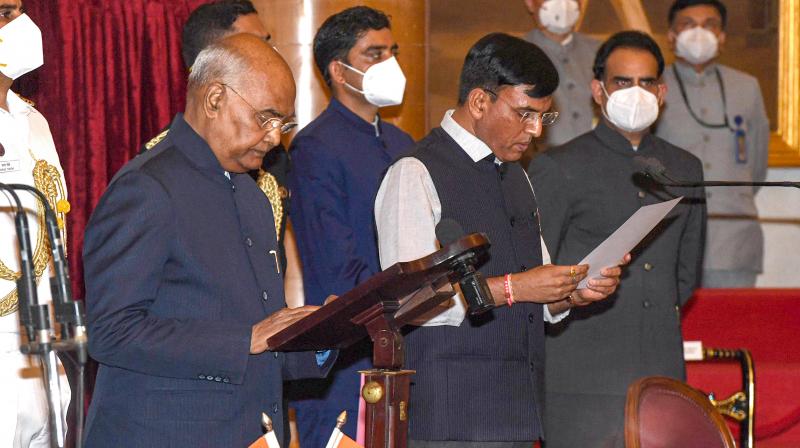 New Delhi: Keeping in mind caste equations and regional aspirations ahead of crucial Assembly polls, especially in Uttar Pradesh, and the 2024 Lok Sabha elections, the much-awaited reshuffle and expansion of Prime Minister Narendra Modi's Council of Ministers finally took place on Wednesday with the induction of many new, young leaders, some expected promotions and at least three shocking departures.

Later in the evening portfolios of ministers were announced with Mr Mandaviya getting the health portfolio, Anurag Thakur getting I&B as well as sports and youth affairs, Hardeep Puri getting petroleum, urban and housing, G. Kishan Reddy getting culture, tourism and development of Northeast, and Kiren Rijiju getting law and justice.

Among the new entrant in the Council of Ministers, Sarbananda Sonowal got Ayush, port, shipping and waterways, Ashwini Vaishav got Railways, communication and IT, Bhupendra Yadav got environment and labour ministries, Jyotiraditya Scindia got civil aviation, Pashupati Kumar Paras got food processing, Ashwini Vaishnav got Railways, IT and communications. Meenakshi Lekhi is MoS, external affairs and culture, while home minister Amit Shah will now be assisted by three MoS -- Nishith Parmanik, Ajay Kumar along with Nityanand Rai, who was inducted in Team Modi in 2019.

The reshuffle, which was preceded by 12 resignations, including of three heavy weights -- Union health minister Dr Harsh Vardhan, information technology minister Ravi Shankar Prasad and information & broadcasting minister Prakash Javdekar -- was also seen as weeding out ministers who may have turned into liabilities at a time when the Modi government has been under attack from the Opposition over mismanagement of the second wave of Covid-19 that led to an unprecedented number of deaths and devastated the economy. Some departures seemed to be an attempt by Prime Minister Modi to end battles on a thousand fronts that were leading to more criticism than serving any purpose.

The overhaul also ushers in a generational shift in the ruling BJP, as the average age of the Union Council of Ministers has dropped to 58 years with 14 ministers now below 50 years of age.

Of the 43 leaders who were administered oath of office, from Uttar Pradesh -- where the BJP is already in battle mode for coming Assembly polls -- seven new members were inducted in Team Modi, while from West Bengal, where the Mamata Banerjee-led TMC retained power in the recently concluded Assembly polls, four new BJP leaders have been accommodated in the Council of Ministers.

Ally Apna Dal's Anupriya Patel, who was an MoS in the last government and whose meeting with the Congress leaders, including Priyanka Gandhi ahead of last Lok Sabha polls is said to be the reason for keeping her party out of the NDA government till now, also made it to Team Modi as an MoS. But her inclusion has left another ally from UP, Nishad Party, agitated. Another significant induction is that of Udupi-Chikmagalur MP, Shobha Karandlaje, who is considered close to Karnataka chief minister and Lingayat strongman B.S. Yeddiurappa. The Karnataka BJP is abuzz with rumours of a leadership change as voices of dissent are growing against the 78-year-old CM.

With Nishank resigning, Uttarakhand, another state that's going to have polls soon, has been represented by Naintal-Udhamsingh Nagar MP, Ajay Bhatt in Team Modi.

In the current Council of Ministers, defense minister Rajnath Singh and minority affairs minister Mukhtar Abbas Naqvi are the only two who had also served in the Atal Bihari Vajpayee government.

Five representatives from Northeast, including Sarbanand Sonowal from Assam, Kiren Rijiju from Arunachal Pradesh, Rameswar Teli from Assam, Pratima Bhoumik from Tripura and Rajkumar Ranjan Singh from Manipur are now part of the NDA government.

After the reshuffle and expansion, the NDA government has 27 OBC ministers, 12 SCs, eight STs, 11 women, five minorities and 21 belonging to other castes.

While speculation is rife that non-performance was the reason why some of these ministers -- excluding those who had asked to be kept out of the Union Council due to health reasons -- were asked to resign, the ruling BJP was abuzz that some of the ministers including, Ravi Shankar Prasad and Prakash Javadekar, will now be the voice of the party and guide the party's spokespersons ahead of Assembly and Lok Sabha polls. Mr Prasad had been in the news lately for an escalating standoff between the Indian government and Twitter.

From West Bengal, which earlier had two ministers -- Debashree Chaudhuri and Babul Supriyo -- now four members (Nishith Pramanik, Shantanu Thakur, John Barla and Subhash Sarkar) are part of the NDA government. While Shantanu Thakur is from the Matua community, Mr Pramnaik is from the Rajbangshi community. Both influential communities in West Bengal had voted in favour of the BJP in the recently concluded Assembly polls. Though the BJP failed to dislodge TMC, increasing the representation of the state in Team Modi was seen as a message to the Mamata Banerjee led outfit that the BJP has not given up and will be more aggressive in its strategy in the state.

Ahead of the swearing-in ceremony at Rashtrapati Bhawan's Darbar Hall, PM Modi, Union ministers Rajnath Singh and Amit Shah and BJP president J.P. Nadda held a meeting with BJP leaders who were to be part of Team Modi at 7, Lok Kalyan Marg.