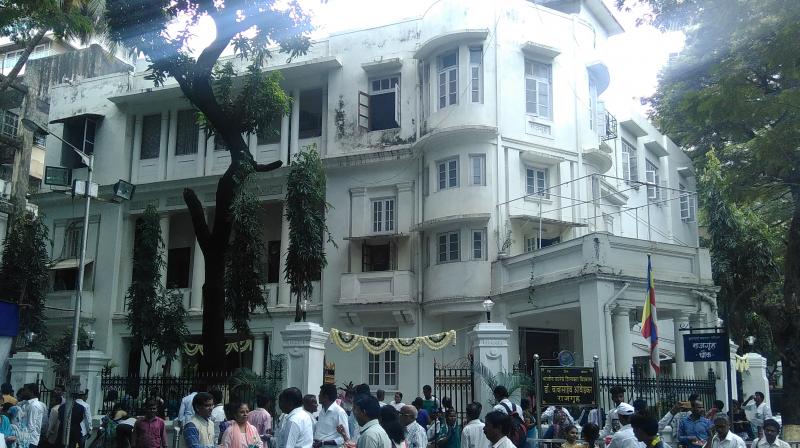 Mumbai: The police on Wednesday detained a suspect after a man vandalised `Rajgruha', Dr Babasaheb Ambedkar's residence in Matunga in central Mumbai.

The incident, which took place on Tuesday night, evoked condemnation from political leaders including Maharashtra Chief Minister Uddhav Thackeray who said strict action will be taken against those involved.

As per the complaint lodged by Ambedkar's grandson Bhimrao Ambedkar at Matunga Police Station, the unidentified accused who was captured in CCTV seemed to be mentally unstable.

He had spotted the man near the house on Monday evening, Bhimrao Ambedkar told the police, an official said.

When he asked the man why he was loitering, he glared at him in anger before leaving, Ambedkar told the police.

Mumbai police had registered an FIR against unknown persons following the vandalism at Rajgruha. Two persons threw stones on glass windows, and damaged CCTV cameras and potted plants at Rajgruha in Dadar area here on Tuesday night, the official said.

CCTV footage from the erstwhile home the Constitution architect shows a person smashing flower pots in the compound before fleeing, the official had said.

Located in Hindu Colony, Dadar, the two-storeyed heritage bungalow houses the Ambedkar Museum where Babasaheb's books, portrait, ashes and vessels are among the artefacts.

The current residents of Rajgruha include Babasaheb's daughter-in-law, and his grandsons Vanchit Bahujan Aghadi leader Prakash Ambedkar, Anandrao and Bhimrao.

Prakash Ambedkar, who was in Akola when the attack took place, had appealed for calm and asked his followers to not gather outside the house.

Maharashtra Home Minister Anil Deshmukh has already assured that strict action will be taken against the culprits.

"This is highly condemnable. @CMOMaharashtra should immediately look into this. Rajgruh is not just a memorial, it is a reminder of the legacy of Dr BR Ambedkar," AIPCMumbaiEast tweeted.