India   All India  08 Jul 2020  Amid coronavirus crisis, Amarnath Yatra to be held in staggered manner this time
India, All India

Amid coronavirus crisis, Amarnath Yatra to be held in staggered manner this time

However, a final decision on the pilgrimage to the shrine in Himalayas will be taken later next week. 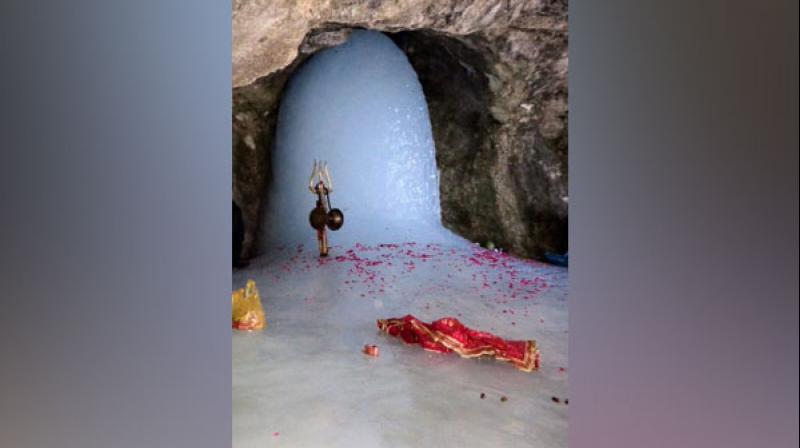 New Delhi: The annual Amarnath Yatra in the Himalayas will be conducted in a staggered manner and not more than 500 pilgrims will be allowed to visit the sacred cave shrine of Lord Shiva daily due to the coronavirus pandemic, officials said on Wednesday.

The issue of pilgrimages to the Amarnath and Vaishnodevi shrines, both located in Jammu and Kashmir, was discussed at a high-level meeting attended by Union ministers G Kishan Reddy and Jitendra Singh and senior officials of the Ministry of Home Affairs and the Jammu and Kashmir administration.

The Amarnath Yatra is likely to commence on July 21.

"This year's pilgrimage will be conducted in a staggered manner and not more than 500 pilgrims will be allowed to visit the shrine daily due to the COVID-19 situation," an official privy to the discussion said.

Around 9,000 people have been tested COVID-19 positive in the Union Territory and around 145 people succumbed to the virus so far.

The route through Pahalgam is yet to be cleared as it is full of snow and the pilgrimage may be allowed only through the Baltal route this year.

However, a final decision on the pilgrimage to the shrine in Himalayas will be taken later next week, the official said.

The authorities are particularly concerned over the COVID-19 pandemic as the symptoms for the virus and high- altitude sickness are almost same.

The doctors in the Union Territory and the armed forces are already stressed and hence, allowing a large number of pilgrims to go for the Amarnath pilgrimage will be an additional burden on medical staff and infrastructure, another official said.

In case of Vaishnodevi shrine, the visit to the temple has been suspended till July 31 and authorities are contemplating allowing it first for local people. Later, depending on the coronavirus situation, people from outside the state will be allowed, the official said.

The meeting also reviewed the ongoing development works in Jammu and Kashmir.

These include implementation of centrally sponsored schemes, progress in achieving targets under the Prime Minister's Development Package 2015, issues raised during the outreach carried out by the union ministers in January this year, and issues related to implementation of J&K Reorganisation Act.

The erstwhile state of Jammu and Kashmir was bifurcated on August 5, 2019 into two UTs after abrogation of the special status given to it under Article 370.

The meeting was also attended through video conference by Jammu and Kashmir Lieutenant Governor G C Murmu, Chief Secretary B V R Subrahmanyam, divisional commissioners of Kashmir and Jammu, and other senior officers.