Will the ‘tottering’ Kamal Nath government last its full term?

Political circles are buzzing with talk on the stability of the Kamal Nath government, which has a wafer-thin majority. 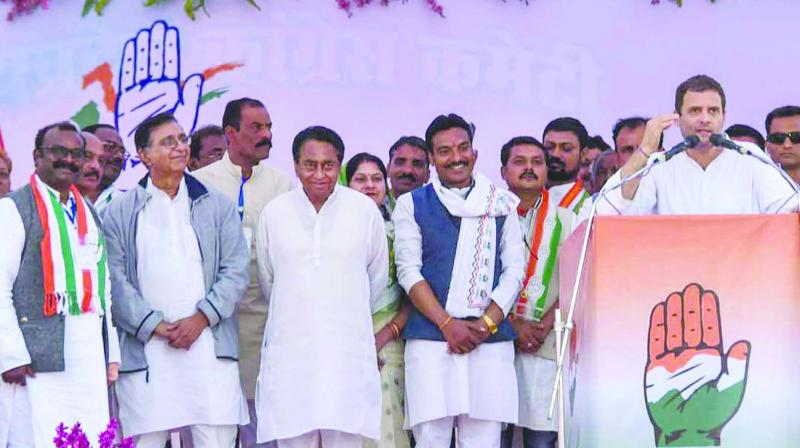 A file photo of Kamal Nath with Congress president Rahul Gandhi after getting a majority, though wafer-thin, in the Assembly elections in Madhya Pradesh.

Bhopal: The rout of ruling Congress in the recently held Lok Sabha elections in Madhya Pradesh has set the political circles here buzzing with talks on stability of the Kamal Nath government which has a wafer-thin majority in the Assembly.

In fact, a sense of despondency has seemed to have pervaded the Congress here following the party’s LS election disaster with some ministers in the state government even making no secret of their apprehensions on whether their government would complete its full term.

“I wonder how long I will continue (in my position). Others (in the state ministry) also share my view,” state education minister Prabhuram Choudhury reflected while addressing senior officers of his department last week.

Incidentally, the Kamal Nath government has focused its attention on fulfilling promises made by his party in the run-up to the 2018 Assembly elections that returned Congress to power in MP after a gap of 15 years, “rather than setting a clear direction” for it.

The chief minister’s office (CMO), itself, has begun monitoring the execution of the poll promises of Congress by different departments of the state government and created a portal to update progress made in the field.

“The state Congress government is directionless. It is functioning as if it is preparing for a midterm poll in the state,” BJP spokesman here Rajneesh Agrawal told this newspaper here.

“Six months have already passed since the new government assumed power in MP. But, it is yet to announce its policies on industry, agriculture, and health and infrastructure development,” he said while driving his point home.

Even as chief minister Kamal Nath appeared to be endeavouring to ensure stability of his government by wooing two Bahujan Samaj Party (BSP) MLAs, lone Samajwadi Party (SP) legislator and three Independents, who have provided outside support to his government, to join his ministry, Opposition BJP here seemed to be sitting with its fingers crossed waiting for a “word” from its Central leadership on the party’s future course of action vis-à-vis the state government.

“Our Central leadership will take the call on party’s future course of action vis-à-vis Kamal Nath government. But, We are still firm in our belief that the state Congress government will fall on its own due to intensifying factionalism in the ruling party,” a senior BJP leader and former minister indicated.

Sources said BJP leadership has so far not evinced keenness to topple the Kamal Nath government by resorting to horse trading.

“A proposal to pull down the Kamal Nath government by splitting Congress Legislature Party (CLP) has so far been cold-shouldered by the Central leadership of BJP. It appears the Central leadership of the party has a bigger plan on the matter,” the former minister who claimed that at least a dozen Congress MLAs were in touch with him to quit the ruling party said on the condition of anonymity.

Sources however said BJP leadership may not allow the Kamal Nath government to last till March 2020 when biennial elections to three Rajya Sabha seats were scheduled to be held in MP.

The BJP would hardly get one of these three RS seats considering the current strength of the Congress and BJP in the Assembly. But, BJP which reportedly has set a target to gain the majority in the Upper House by March 2020, would like to have its own government in MP to secure all the three RS seats.

“We are expecting the Central leadership of the party to take a call on the matter after the ongoing Parliament session. The party leadership is currently seized with important issues like seeing passage of many important Bills in RS,” he pointed out.

“Our government in the state is very stable. BJP is daydreaming to return to power in the state by pulling down our government. We have proved our majority four times in the Assembly in last six months and are not hesitant to prove it again,” he added.

The Congress has strength of 114 in the 230-member MP Assembly, just short of two seats to gain majority. The party has formed government in the state with outside support from two BSP MLAs, one SP legislator and four Independents.

One of the four Independents has already been inducted in the Kamal Nath ministry.

Congress leadership here was confident that induction of the six MLAs who have given outside support to the government, in the state ministry, would ensure majority for the Kamal Nath government.

The BJP has however predicted that the state Cabinet expansion would rather land the Kamal Nath government in more trouble.

“The aspirants for ministerial berths in CLP may revolt if they will be ignored in the proposed Cabinet expansion,” said Mr Agrawal.