Court of Inquiry into the accident was completed once but had to be reopened as officers facing trial wanted to question more witnesses. 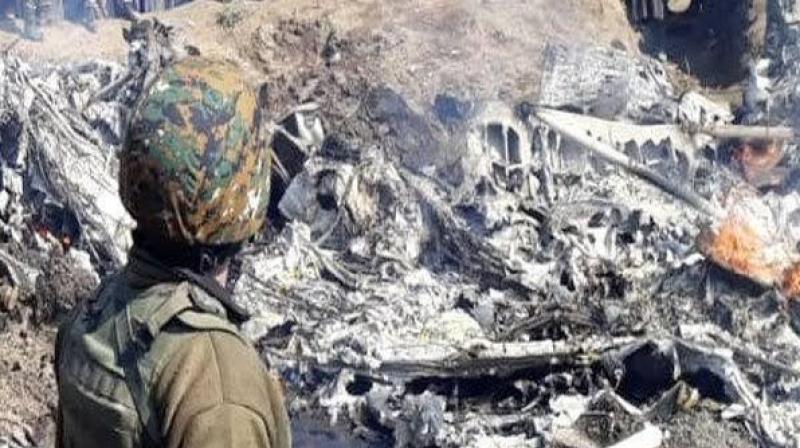 Apart from the officer in the ATC, one officer in the air defence of the air base is likely to be court-martialed for the crash of its Mi-17V5 chopper near Srinagar on February 27. (Photo: ANI)

Srinagar: Confusion created by an IAF officer in the Air Traffic Control (ATC) could have been the main reason behind the accident in which six Air Force personnel were killed, reveals a probe into the February 27 Mi-17 chopper crash that took place in the aftermath of the Balakot air strikes.

It is emerging that one of the officers in the ATC tower first cleared the ill-fated Mi-17 chopper to return to the base but on the other hand also communicated to the air defence unit that there was no aircraft due to land at the air base, sources in the Air Force told ANI.

"During the probe, it is emerging that the officer first called the Mi-17 back to the Srinagar air base when it was going for a mission and then when the air defence officers sought to know if any own aircraft was coming towards the air base, they were told that no chopper or aircraft was inbound at the base," they said.

The Court of Inquiry into the accident was completed once but had to be reopened as the officers facing the trial wanted to question more witnesses, the sources said.

Apart from the officer in the ATC, one officer in the air defence of the air base is likely to be court-martialed for the crash of its Mi-17V5 chopper near Srinagar on February 27.

The chopper crashed near Budgam on the morning of February 27 when Pakistan launched a counter-attack in response to the Balakot air strikes.

The Mi-17 chopper crashed with six occupants on board and reports had emerged that the chopper was hit by its own air defence system SPYDER which is deployed in Srinagar. However, the overall information will only be disclosed once the investigation is complete.

Top Defence Ministry and Air Force officials are of the view that severe punishment should be given to personnel found guilty for the accident.

The Mi-17 V-5 chopper belonged to the 154 Helicopter Unit and it crashed within 10 minutes after taking off while the Indian fighter jets were involved in an aerial dogfight with Pakistani jets. Wing Commander Abhinandan Varthaman was also a part of this dogfight.

One civilian on the ground also lost his life along with the six IAF personnel on board.

The court of inquiry was delayed as the black box of the chopper was reportedly stolen by the villagers in Budgam and some locals had also reportedly pelted stones at military vehicles after they approached the crash site.