BSF launches major exercise to fortify anti-infiltration grid along the Pak border in Punjab and Jammu. 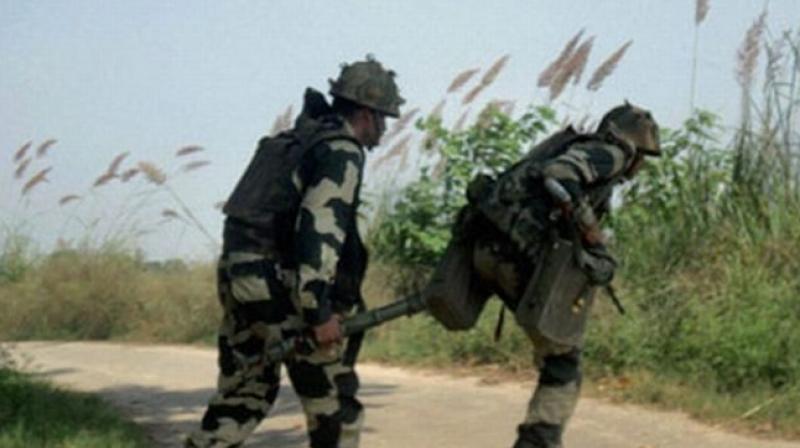 The BSF is the primary force guarding this frontier as the ‘first line of defence’. (PTI/File)

New Delhi: A massive exercise to fortify the anti-infiltration grid along the Pakistan border in Punjab and Jammu has been launched by the Border Security Force (BSF).

The operation, code named ‘Sudarshan’, was launched on July 1 and will cover the entire over 1,000-kms length of the India-Pakistan Intern-ational Border. While Jammu shares about 485-kms of the sensitive IB with Pakistan, about 553-kms of the front is in Punjab. Further, it runs down towards Rajasthan and Gujarat on India’s western flank.

The BSF is the primary force guarding this frontier as the ‘first line of defence’.

According to sources, a huge assortment of heavy machinery, communication interceptors and mobile bullet-proof bunkers have been mobilised, backed by thousands of BSF personnel, as part of the exercise. Frontier and battalion commanders (from the Inspector General to the Commandant rank), their second-in-commands and company (unit) commanders of the about 40 battalions of the BSF, are camping in the forward areas of the two states to finish the operation within a fortnight and be at their bases by July 15, they said. Multiple patrols are being undertaken to strengthen Indian defence positions and locations for launching offensive action at these borders from the point of view of sealing the front against infiltration of terrorists, drug mules and also to ensure a befitting reply to unprovoked firing from the Pakistani side.

This exercise has been named ‘Sudarshan’ drawing from the legendary and mythological cutting wheel or the ‘sudarshan chakra’ on Lord Krishna’s finger that decimates the enemy with sharp precision and returns to its original place in quick time, sources said. The commanders of the force have been asked to prepare their watch towers and sentry posts better, replenish arms and ammunition dumps, strengthen artillery positions, check and plug border fence breaches, detect underground and cross-border tunnels and make all operational and logistical arrangements to strengthen the vigil, along the sensitive and infiltration-prone border. The commanders have been asked to ensure that the jawans follow the standard operating procedures and that there is an all-time stock of bullet-proof vests, armoured head gear and combat gear.

As part of the operation, big earthen mounds on the International Border will be flattened, new bunkers and ‘ditch-cum-bandh’ (trenches) are being dug and BSF posts are being better armoured against sniper firing incidents that have claimed lives of many troops in the past, sources said.