Condemning Jayant Sinha’s action, the Congress slammed the BJP and accused it of fanning communal tension. 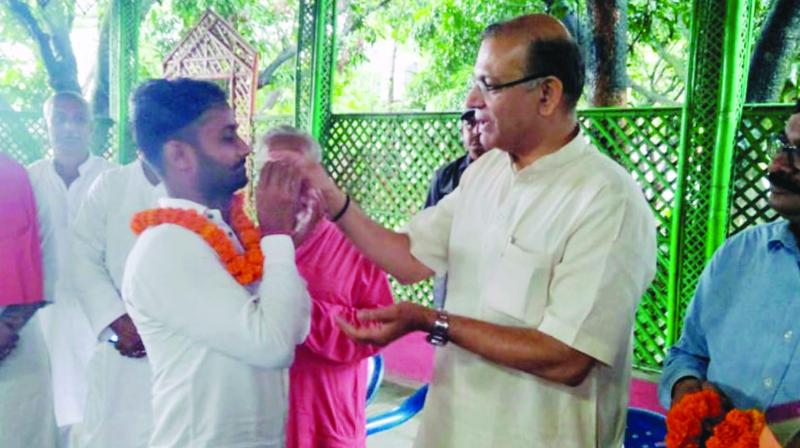 Union minister Jayant Sinha on Friday felicitated eight men who were held guilty of killing meat trader Alimuddin Ansari, 55, in the name of cow vigilantism in Jharkhand on June 30 last year. The life sentences of eight men have been suspended by the HC.

New Delhi: After facing severe flak over felicitating eight men who were earlier convicted for mob lynching, Union minister Jayant Sinha on Saturday tried to wriggle out of the situation by defending himself on social media. In a series of tweets, he said he was just “honouring the due process of law”.

The eight men, who were out on bail after their life sentences were suspended, were convicted for lynching a meat trader in the name of cow vigilantism in Jharkhand. After getting bail, they went with a local BJP leader to Mr Sinha’s residence. Photographs of him garlanding the convict surfaced on social media and went viral. He faced the wrath of the Twitteratti, the Opposition and even his own father — Yashwant Sinha.

He later tried to defend his actions. He said he had full faith in India’s judicial system and the rule of law and went on to add that while he unequivocally condemned all acts of violence and rejected any type of vigilantism, he had misgivings about the fast-track court judgment sentencing each of the 11 accused to life imprisonment.

“I have repeatedly expressed my misgivings about the fast-track court judgement sentencing each accused to life imprisonment. I am pleased that the hon’ble high court will hear the matter as a statutory court of appeal to test the correctness of the fast-track Court order.”

In another tweet he said, “Unfortunately, irresponsible statements are being made about my actions when all that I am doing is honouring the due process of law. Those who are innocent will be spared and the guilty will be appropriately punished.”

His father Yashwant Sinha, a former Union minister, also took to Twitter to express his displeasure in the strongest terms. “Earlier I was the nalayak baap (unworthy father) of a layak beta (worthy son). Now the roles are reversed. This is twitter. I do not approve of my son’s action. But I know even this will lead to further abuse. You can never win,” he tweeted.

The Opposition parties were quick to join the clamour against Jayant Sinha.

Condemning Jayant Sinha’s action, the Congress slammed the BJP and accused it of fanning communal tension. “It is only in ‘New India’, where those who are supposed to get the noose are instead being garlanded,” the Congress said in a tweet. “The minister of the BJP-led Central government, which honours those accused of riots, is now garlanding convicts of lynching. Is the Modi government encouraging social unstability?” it added.

CPI-M general secretary Sitaram Yechury also attacked the BJP for “tearing apart India’s social fabric” and promoting politics of hate. “We don’t need to look far to see who or which ideology is tearing our social fabric apart: when union ministers patronise those convicted of lynching,” he said in a tweet.

Swaraj India founder and renowned advocate Prashant Bhushan also slammed the minister and accused Prime Minister Narendra Modi and BJP president Amit Shah of patronising “lumpen thugs”. “Jayant Sinha hugs and garlands Ramgarh lynching convicts as they come out on bail. Obviously the junior minister is keen to remain in the good books of his bosses, Modi and Shah, who patronise these lumpen thugs,” he said.