Yadav, who is facing trial in the fodder scam case, was in Ranchi when CBI raided his residential premises in Patna. 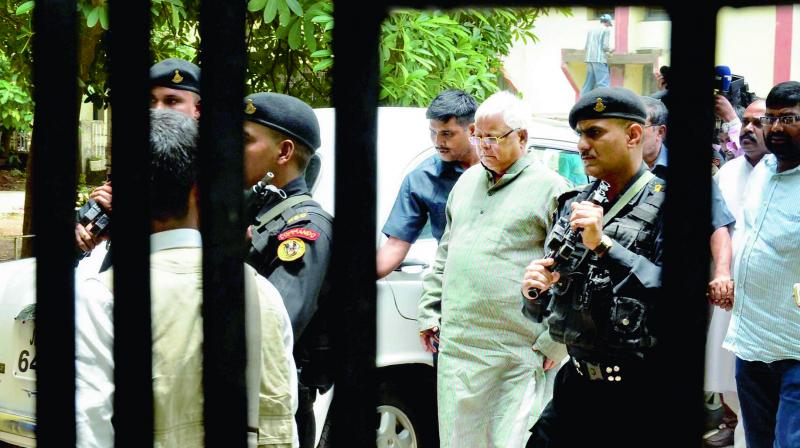 New Delhi/Patna: RJD chief Lalu Yadav and his family members, including wife Rabri Devi and son Tejashwi, faced fresh trouble on Friday as the CBI charged them with corruption in connection with a land scam and raided 12 of their premises in Patna and other cities.

Simultaneous raids were conducted in Ranchi, Bhubaneswar and Gurgaon over alleged irregularities in tenders allotted to a private company — Sujata Hotels — for development, maintenance and operation of two railway hotels in Ranchi and Puri.

CBI additional director Rakesh Asthana alleged that the tender process was rigged in favour of Sujata Hotels by Mr Yadav during his tenure as Union railway minister in 2004.

Mr Yadav, who is facing trial in the fodder scam case, was in Ranchi when CBI raided his residential premises in Patna.

The CBI suspects that in exchange for the contract favour, Mr Yadav received a “prime plot of land” in Patna from Ms Gupta’s marketing firm — Delight Marketing. The three-acre plot was handed over to a company allegedly owned by Mr Yadav’s wife and son Mr Tejashwi, who is also Bihar’s deputy chief minister.

While there was complete silence from the RJD’s alliance partner and Bihar chief minister Nitish Kumar, Mr Yadav described the raids as “politically motivated” that were “carried out at the behest of the Prime Minister”. The BJP has demanded Mr Tejashwi’s dismissal from the government.

Information and broadcasting minister M. Venkaiah Naidu, responding to the RJD’s charges, made it clear that neither the government nor the BJP had anything to do with the CBI raids.

“Where is the political vendetta? BJP is nowhere involved in this. CBI is doing its duty,” Mr Naidu said.

Speaking to this newspaper, the BJP leader said that “Nitish Kumar must sack Tejashwi Yadav from his cabinet after the CBI registered FIR against him and his family members”.

The CBI began its raids simultaneously at Patna, Ranchi, Bhubaneswar and Gurugram. The raids included the premises of the Yadav family as well as one of Mr Gupta.

The CBI additional director said after Mr Yadav favoured the hotel company the owners of Sujata Hotels gave three acres of land in western Patna to a company - Delight Marketing — which is known to the family of Mr Yadav at a very low cost. Subsequently, between 2010 and 2014, this land was transferred to another company - Lara Projects — owned by family members of Mr Yadav.

The three-acre land was allegedly sold at Rs 1.47 crore, much lower than the prevailing market rate. In the last one year, the market price of this land has shot up to Rs 32.5 crore, the CBI director claimed.