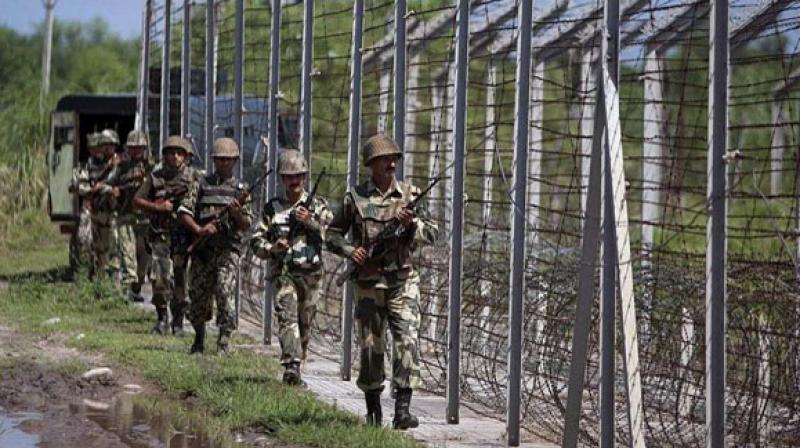 Indian Army is retaliating strongly and effectively to the ceasefire violation which started at around 6.30 am on Saturday. (Photo: Representational/File)

Jammu: Two civilians were killed and a few others suffered injuries on Saturday when the Pakistani army violated the ceasefire along the LoC in Jammu and Kashmir's Poonch district, officials said.

The two civilians killed were husband and wife and the injured children, amid others, are of the dead couple.

The Pakistani army initiated unprovoked and indiscriminate firing from small arms, automatic weapons and mortars on Indian Army posts along the Line of Control (LoC) in Poonch sector from 6:30 hours, a defence spokesman said. The Indian troops retaliated effectively, he added.

"Very heavy shelling is going on. So far two civilians have died in Pakistani shelling in Khadi Karmara village along the LoC," he said, adding that some other people suffered injuries.

There have been 23 incidents of ceasefire violation, an attack by Pakistan Special Forces team and two infiltration bids in June, in which four people including three jawans were killed and 12 were injured.

On June 29, two Indian Army jawans were injured when the Pakistani troops fired from small arms and shelled mortars on forward posts and civilian areas along the LoC in Poonch district.

Even on Eid-ul Fitr on June 26, the Pakistani army fired small arms and automatic weapons and shelled mortars along the LoC in the Bhimbher Gali sector of Rajouri.

On June 22, a Pakistani Special Forces team sneaked across the LoC into Poonch under cover of heavy fire and killed two jawans -- 34-year-old Naik Jadhav Sandip of Aurangabad and 24-year-old Sepoy Mane Savan Balku of Kolhapur.