The Congress president reached Malappuram in the afternoon where he held a series of meetings. 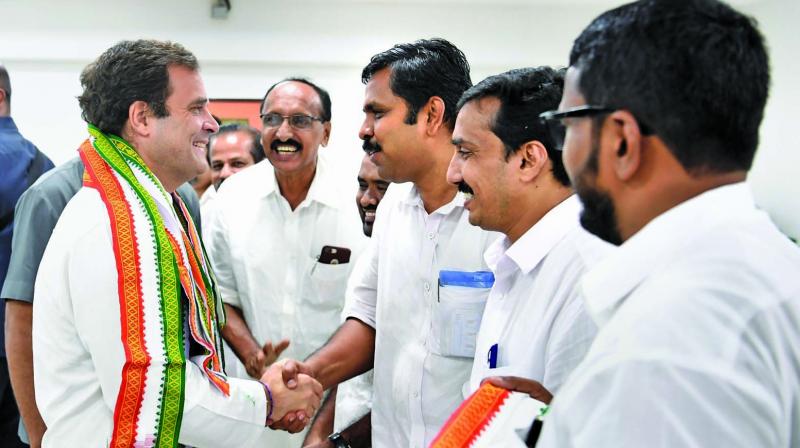 Malappuram: On his first trip to his Wayanad constituency after Lok Sabha elections, Congress president Rahul Gandhi on Saturday attacked Prime Minister Narendra Modi for allegedly spreading hatred and intolerance and vowed to use love and affection for defending weak people under attack by the government.

During a massive roadshow in the his constituency, Mr Gandhi said the Congress will emerge as a strong Opposition and defend the poor.

“Modi might have so much money. He might have media by his side... He might have rich friends with him but the Congress will continue to fight against the intolerance created by the BJP,” Mr Gandhi said.

“The hatred and intolerance created by BJP and Modi will be dealt by the Congress with love and affection,” Mr Gandhi added.

Mr Gandhi, who was in his constituency to express gratitude to people after the poll win, said that he will represent the difficulties of the people of Wayanad in Parliament. Mr Gandhi won the Wayanad seat with a margin of 4.31 lakh votes.

Before leaving for his new constituency in South, Mr Gandhi tweeted, “I will be in Wayanad, starting this afternoon and till Sunday, to meet citizens and Congress workers. It’s a packed schedule with over 15 public receptions planned over the next three days.”

The Congress president reached Malappuram in the afternoon where he held a series of meetings. Since becoming an MP from the state, Mr Gandhi has been active in his constituency. He had recently urged Kerala chief minister Pinarayi Vijayan to provide assistance to the family of a Wayanad farmer, who allegedly committed suicide due to non-repayment of loans.

Mr Gandhi’s visit comes amid a deep crisis within the party where infighting has erupted in several state units.