Dog fights with cobra to save owner’s family

The pet dog guarding their gate spotted the reptile and prevented it from entering into the house. 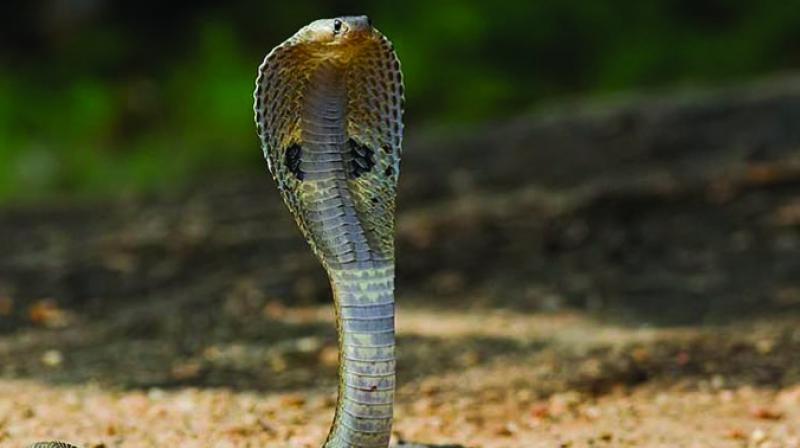 After being informed, member of the snake helpline Subendu Mallick reached Sambit’s residence and rescued the injured cobra. (Representational image)

Bhubaneswar: Instances of pet dogs showing faithfulness to save lives of their masters have always evoked love and affection for the animal tribe. In a fresh such case, a dog foug-ht against a cobra to guard lives of its owner’s family members in Bhubaneswar.

According to one Sambit Das, a 5-ft long Cobra was trying to enter into their house at Badagada canal road on Thursday night. The pet dog guarding their gate spotted the reptile and prevented it from entering into the house. When Das’ family members woke up hearing their dog barking, they found their pet caught in serious fight with the snake. “Despite being repeatedly beaten by the snake, he threw the reptile outside the gate twice. But when the snake entered into the house again, our pet attacked and mauled it. We immediately rushed him to the veterinary dispensary inside at Odisha University.

He was given two injections, saline and also administered anti-venom drugs. Now his condition seems to be stable,” said Sambit Das.

After being informed, member of the snake helpline Subendu Mallick reached Sambit’s residence and rescued the injured cobra.

On March 4 night in 2019, a pet dog had sacrificed its live to save members of his master’s family from the attack of venomous snake at Jatni under Khurda district in Odisha.

Tyson, a male Dalmatian breed dog had died after fighting an intense battle with an Indian Cobra to save his owner Arif Aman and his family late on Monday night.

On  August 25, 2017, a pet dog at Munda Muhana village in Janla area on outskirts of Bhubaneswar had sacrificed its life after fighting with a poisonous snake to protect its master’s family.

On July 13, 2016, a pet dog of Doberman speicies had paid its life to save eight members of its master’s family at Sebekapur village under Raygada block of Gajapati district, nearly 400 km from here.