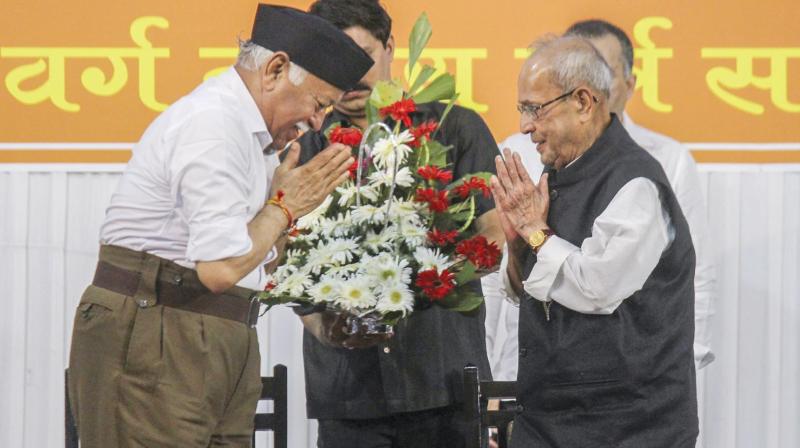 New Delhi: Courting controversy, the displeasure of his parent organisation Congress and even his daughter, former President Pranab Mukherjee while attending an RSS event at the Sangh headquarters in Nagpur on Thursday, taught the Sangh a lesson on “tolerance” and the importance of a “composite culture”.

“Secularism” may be a dirty word for the right wing, but the former President brought up the subject with swayamsevaks and RSS top echelons and said, “Secularism is a matter of faith for us”.

His address was in sharp contrast to that of RSS chief Mohan Bhagwat, who in his 40-minute speech subtly talked about consolidation of Hindus and that only “Hindus are answerable for India”.

Mr Mukherjee, who had initially been criticised by a section of  his parent outfit — Congress — for attending the RSS event, not merely came out unscathed, but also drew praise from the party. After his speech, a euphoric  Congress announced: “He (Pranab Mukherjee) showed the mirror of truth to the RSS at its headquarters.” There has been no reaction from BJP. The RSS merely said that Mr Mukherjee “spoke like an elder statesman and the Sangh welcomes issues of patriotism and nationalism and ending all types of intolerance and violence”. The Congress’ criticism of  Mr Mukherjee, before his speech erupted on social media as he described the founder of RSS Keshav Baliram Hegdewar as a “great son of mother India”.

While aggressive cultural nationlism has emerged as the main plank of  the saffron brigade, Mr Mukherjee pushed for a different brand of nationalism and quoted Mahatma Gandhi saying, “Indian nationalism was not exclusive, aggressive or destructive.”

As hundreds of swayamsevaks and the top echelons of the RSS watched, Mr Mukherjee said, “I am here to share my understanding on nation, nationalism and patriotism about our country which is ‘Bharat’. Earlier while the RSS brass saluted the “bhagwa dhwaj (saffron flag)”, the former President merely stood still and watched.

During his address Mr Mukherjee went on to refer to BJP and Sangh’s traditional bugbear — Jawaharlal Nehru. While he finished his praise of BJP’s icon Sardar Patel in one sentence for the “consolidation” of India, Mr Mukherjee eulogised Nehru and his conviction in secularism and pluralism. “I am convinced that nationalism can only come out of the ideological fusion of Hindu, Muslim, Sikh and other groups in India. That does not and need not mean the extinction of any real culture of any group, but it does mean a common national outlook, to which other matters are subordinated,” Mr Mukherjee quoted from Nehru’s Discovery of India.

He then went on to quote from Rabindranath Tagore’s Bharat Teertho in which the poet says, “No one knows at whose beckoning call how many streams of humanity came in indomitable waves from who knows where and lost themselves in this vast ocean.”

On the issue of “tolerance” Mr Mukherjee reminded one of what the then BJP Prime Minister Atal Behari Vajpayee had told Mr Narendra Modi after 2002 Gujarat riots. Mr Modi who was Gujarat chief minister during the carnage was asked by an upset Vajpayee to perform “raj dharma”.

Targeting divisive and sectarian politics, Mr Mukherjee said, “People are at the centre of all activities of the State and nothing should be done to divide them. The aim of the State should be to galvanise them to fight a concerted war against poverty, disease and deprivation. Only then can we create a nation where nationalism flows automatically.”

If the government has been speaking about its economic achievement, Mr Mukherjee said, “While we have done well in many macro-economic areas, we have not fared well in the World Happiness Index. We rank 133rd.”

Mr Mukherjee, whose Twitter handle describes him as “Citizen Mukherjee” concluded by saying, “Our motherland is asking for happiness. Every time a woman and child is hurt, the soul of India is wounded.”