They have been identified as Pawan Kumar Kaul and Upendra Kumar. 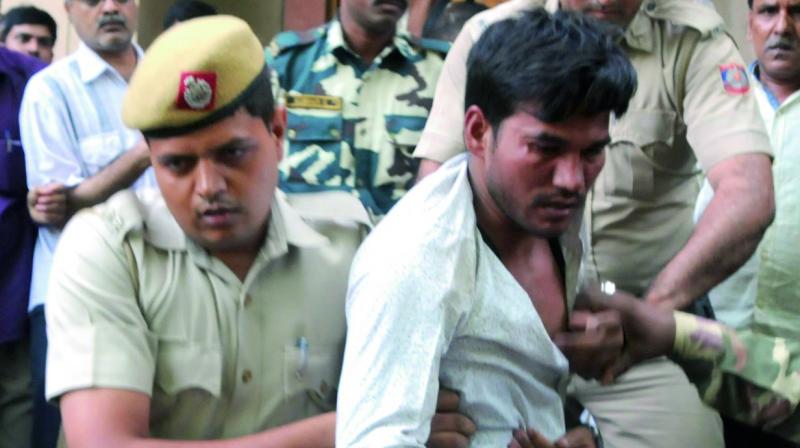 Police personnel takes away one of the two alleged right-wing activists at the CPI(M) headquarters in New Delhi on Wednesday. (Photo: Pritam Bandyopadhyay)

New Delhi: CPI(M) general secretary Sitaram Yechury was attacked by two alleged right-wing activists at the party headquarters, A.K.G. Bhavan, on Wednesday. The attackers who raised slogans of “Hindu Sena zindabad” and “CPI(M) murdabad” have been detained by the police. They have been identified as Pawan Kumar Kaul and Upendra Kumar.

The police is trying to probe whether they belong to Hindu Sena — an ultra right-wing organisation. This is the first time a CPI(M) leader was attacked in the party office in the national capital by any right-wing element.

The CPI(M) general secretary did not sustain any injury. The attack came when Mr Yechury was entering the floor for a press briefing. The assailants, who had entered the building posing as journalists, tried to push Mr Yechury and began raising the slogans. Before they could move closer to the CPI(M) general secretary, they were immediately surrounded by party workers, who then pounced on them. One of the attackers managed to run out of the building, but was caught by the police outside.

The other one was handed over to the police by CPI(M) workers. There was heavy police presence outside A.K.G. Bhavan as the party was concluding its two-day politburo meeting, being attended by senior leaders and chief ministers of Kerala and Tripura.

Mr Yechury, who later continued with the media briefing, tweeted: “We will not be cowed down by any attempts of Sangh’s goonda-gardi to silence us.” There was an all round condemnation by the political parties, particularly the Opposition.

Congress spokesperson Sandeep Dikshit strongly condemned the incident saying it was a “dastardly attack against the Opposition and shows the intolerance of right-wing elements”. Kerala chief minister Pinarayi Vijayan said that the assault amounted to “an assault on Indian democracy”.

DCP (Delhi) B.K. Singh said that it seemed that the accused belonged to one Hindu Sena. He, however, said that the police is trying to verify the credentials of the accused.

The Hindu Sena appeared to be another fringe Hindutva groups among many which have been mushrooming of late. The official website of the organisation, also seemed to have organised protests against BJP during the Uri attack. The catchline of the organisation stated-”Bhagwa dalne ki zaroorat nehi-andar se Hindu hona chahiye (Thre’s no need to put on saffron garb-one has to be Hindu from inside.”