India   All India  08 Jun 2017  Killed Mandsaur farmers' should get martyr status: Rahul to kin of deceased
India, All India

Killed Mandsaur farmers' should get martyr status: Rahul to kin of deceased

The Congress VP also said that the party is with the farmers and will take their demands to the Parliament. 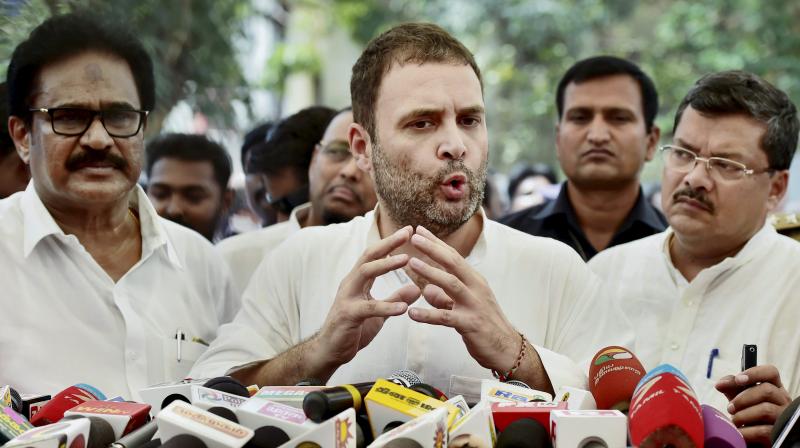 Nimbaheda (Rajasthan): Rahul Gandhi on Thursday met the families of farmers killed in police firing on Tuesday during agitation in Madhya Pradesh, and vowed to press for farm loan waiver across the country.

The kin of four of the five deceased farmers were brought to Rajathan's Chittorgarh district by Congress workers to meet Gandhi after he was released along with 250 supporters on border by Madhya Pradesh police, which had kept them in preventive arrest for four hours after they tried to enter Mandsaur, the epicentre of the violent farmers’ agitation.

The Congress Vice President lashed out at the BJP governments in Rajasthan and Madhya Pradesh for stopping him from visiting Mandsaur and demanded martyr status for the farmers who were killed in the police action during the stir for loan waiver, MSP rise among other demands.

"I wanted to meet the families for two minutes to say that we are with them, but I was not allowed. I only wanted to share their grief....Am I not a citizen of this country? Am I not allowed to visit Madhya Pradesh, Uttar Pradesh and other (BJP ruled) states just because I do not belong to the RSS?" he told reporters after consoling the bereaved families.

He attacked the Modi government, saying it has forgotten the farmers and was only interested in waiving the debt of "50 richest people" of the country.

"The farmers in the county are desperately crying for help but the government is not ready to hear them," he said.

He supported the farmers' demand for loan waiver and said that they were not getting their due.

Gandhi said that the loan waiver in Uttar Pradesh had come as he had mounted pressure on the BJP government on the issue.

"I will continue to press every government across the country to waive farmers' loans. I will keep raising the issue in Parliament," he said.

He accused the Shivraj Singh Chouhan government of lying on the issue of farmers death in police firing.

Action should be taken against the security personnel involved in the firing incident. The farmers were not warned and were shot in the chest in violation of all standing operation procedures, he alleged

"This is barbaric. Those who have died should get martyr status."

He also slammed the BJP for saying that he had gone for a 'photo-op' there.

"I only wanted meet the farmers. What was the need for controversy?" Gandhi said.

He added that government can waive loans of Rs 1.10 lakh crore of 50 rich people in the country, then why the loans of those farmers who feed the nation cannot be waived.

But he was detained and later arrested. Gandhi was taken to a guesthouse of a cement company, where he was kept for four hours.

"Rahul Gandhi, along with around 250 Congress leaders, were under preventive arrest under under CrPC  section 151. We had informed them that there is curfew in four police station areas and they should not go there. But despite this, they tried to move towards the area," SP (Neemuch) Manoj Kumar Singh said.

They were later released on the border, he said.