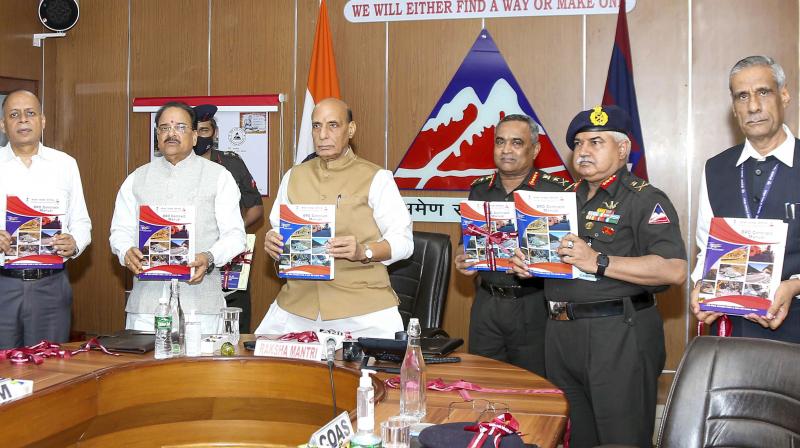 New Delhi: Defence Minister Rajnath Singh on Saturday asked the Border Roads Organisation (BRO) to develop infrastructure at a faster pace through the use of technology, citing how the Chinese side has increased its presence in the Northern sector by carrying out construction activities in mountainous areas.

Singh also said that the development of border areas is a major part of the government's "comprehensive defence strategy", noting that it will bolster the overall security apparatus of the country.

In an address at an event to celebrate the 63rd Raising Day of the BRO, he also said that providing maximum facilities to those guarding India's borders is the top priority of the government.

"The Chinese presence has increased in the Northern sector in the recent past. Due to their proficiency in construction in mountainous areas, they manage to reach different places very quickly," the defence minister said.

"The BRO must continue to work in parallel and focus on increasing their capability with full use of technology," he said adding the government is making all efforts to provide the required support to the BRO.

After the eastern Ladakh face-off began in May 2020, India has been focusing on improving infrastructure along the over 3,400 km-long Line of Actual Control (LAC).

In his remarks, Singh mentioned the recent announcement to an increase of the capital budget of BRO by 40 per cent to Rs 3,500 crore in the financial year 2022-23, reiterating the government's commitment to the country's security and development of border areas.

He assured the BRO of not just budgetary, but all possible support.

"The more empowered the people of border areas become, the more aware and concerned they will be about the security of those areas. Citizens are the greatest power of a nation," Singh said.

"Therefore, with changing times, we are committed to move forward for the development of our border areas. It is our top priority to provide maximum facilities to those who work round-the-clock for our security," he said.

The defence minister also complimented the BRO for opening "new doors of security and prosperity" not just in the areas, but for the entire country.

He described BRO as not just a construction organisation, but a shining example of unity, discipline, dedication and devotion to duty.

Underlining the importance of roads, bridges and tunnels in the progress of a nation, he said the projects completed by the BRO have enhanced the operational preparedness of the armed forces and improved the socio-economic conditions of the people living in far-flung areas.

"Infrastructure development in border areas is an indicator of the Government's unwavering commitment to building a strong, secure and self-reliant 'New India' as envisioned by Prime Minister Narendra Modi," Singh said.

He said border areas have emerged as "new centres of development" and the regions like the Northeast are not only developing themselves but have also become a "gateway" for the all-around progress of the country.

He also commended the BRO for promoting tourism in far-flung areas through its 75 cafes and tourism portals, noting that these initiatives are symbolic to the ever-increasing growth of the organisation.

In his address, BRO Director General Lt Gen Rajeev Chaudhry exhorted the BRO personnel to continue on the path of excellence with renewed vigour and dedication. He encouraged them to soon conclude certain critical tunnel and airfield construction projects.

The software will automate the distribution and utilisation of the resources as well as the budget of the BRO.

The BRO was raised in 1960 and it initially had just two projects.

The organisation has constructed over 60,000 kilometres of roads, over 840 bridges, four tunnels and 19 airfields under adverse climatic and geographical conditions along India's borders as well as in friendly foreign countries, said the defence ministry.