India   All India  08 May 2020  Reports of second gas leak in Vizag untrue: NDRF
India, All India

The NDRF DG appealed to the media to not to run fake news on the gas leak without cross checking. 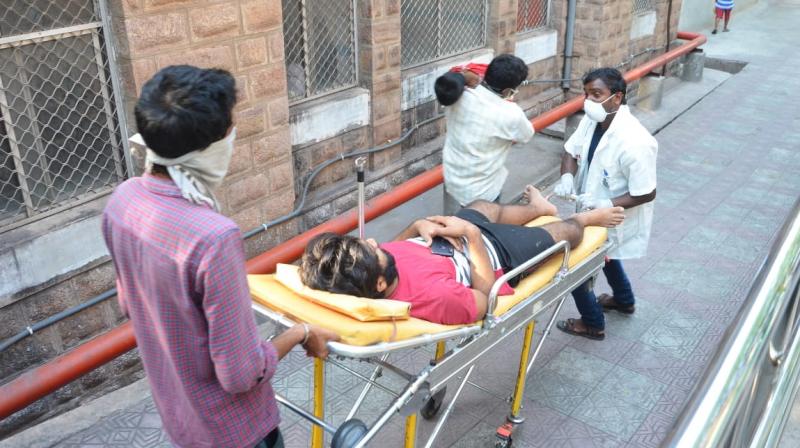 A patient is being taken to a hospital after the gas leak on Thursday. (DC Original)

Anxiety repeated itself in Vizag a day after the gas tragedy after reports of another leak emerged early Thursday morning. However, NDRF refuted reports of second gas leakage in Vizag.

Director-General of National Disaster Response Force (NDRF), SN Pradhan, clarified that it was some fumes which released during the neutralisation process.

"There are rumours in some section of media about a second gas leakage, let me categorically place on record that there is no such second leakage in Vizag. Some fumes get released during the process of neutralising. It happens during the neutralisation process. It is a technical process. That process will continue," Pradhan told ANI.

Earlier in the day, the Ministry of Home Affairs (MHA) responded to reports of another gas leak at LG Polymers in Visakhapatnam and clarified that it was a "minuscule technical leak" and the situation is under control.

"There are media reports that there was another leak. This is clarified that this was a minuscule technical leak. It is required to bring the container in control. It is been controlled and the process of neutralisation is already in process. The situation is under control," the MHA said in a statement.

The NDRF DG appealed to the media to not to run fake news on the gas leak without cross-checking so that people do not get panic.

"The neutraliser chemical has reached the spot in good quantity and it is being used in the process. Rumour mongering must be avoided in the interest of people," he said.

Pradhan informed that experts from Pune and Nagpur, including scientists are monitoring the situation on the ground since last night.

"We are preparing a roadmap with the local administration. This work is being done jointly by the state, Centre and local administration. Tourism minister of the state also visited the spot. We are also present at the spot. Since last night, the experts from Pune and Nagpur including scientists are monitoring the situation on the ground. At the moment, our two commandants and three scientists are camping there," he explained.

On Thursday, styrene gas had leaked in the gas plant of LG Polymers in RR Venkatapuram village in Visakhapatnam district on Thursday morning, which claimed 11 lives.