In Maharashtra, 531 Maharashtra police personnel 480 constables and 51 officers tested positive in the 44 days of the lockdown 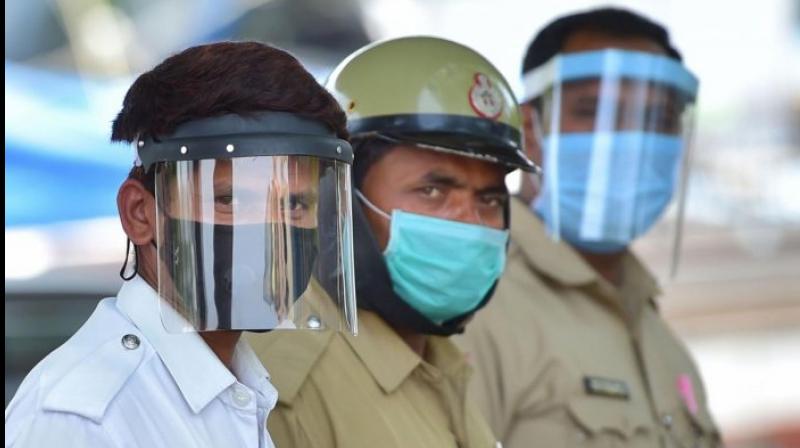 More police, security and health personnel are getting infected by the coronavirus as the total number of cases rises at an alarming rate.(PTI Photo)

New Delhi: More police, security and health personnel are getting infected by the coronavirus as the total number of cases rises at an alarming rate. Two BSF personnel succumbed to Covid-19 while the reported 41 new cases on Thursday. Besides, 82 Indo-Tibetan Border Police personnel tested positive till now, and 37 Delhi police personnel were detected with the virus on Thursday.

In Maharashtra, 531 Maharashtra police personnel 480 constables and 51 officers tested positive in the 44 days of the lockdown. Of these 39, including eight officers, have recovered while five have died.

Around 548 doctors, nurses and paramedics across India have been found positive for the virus, including 69 doctors in Delhi. This does not, however, include field workers, ward boys, sanitation workers, security guards, lab attendants, peons, laundry and kitchen staff.

While Covid-19 cases are declining in European cities, in Asian nations like India the numbers are peaking.

The health ministry says the doubling rate in India is 12 days, but the number of cases have doubled from 10 days ago. In the last four days, with with 12,959 fresh cases, the figures have shot up from 40,000 to over 50,000. Going by this trend, India may have 75,000 cases in a week. The death rate has also jumped, as fatality figures have doubled in 10 days.

Big urban centres are detecting a greater spread of the virus, and the authorities flagged a high fatality rate in states like West Bengal, Gujarat and Maharashtra.

Economist Shamika Ravi, who is tracking Covid data, said five states Gujarat, Maha-rashtra, Delhi, MP and West Bengal are pulling up the national average; Maharashtra and Gujarat more so than others.  She said Delhi has managed to stabilise its death rate, but West Bengal is seeing large increases.

In a desperate bid to contain virus, Ahmedabad authorities have called paramilitary forces and except for milk and medicines all shops will remain shut down for at least one week.

There are also fears that with the lockdown easing, the virus’ spread may worsen.