Plus, there's evidence that migrant workers moving back home are carrying the virus with them 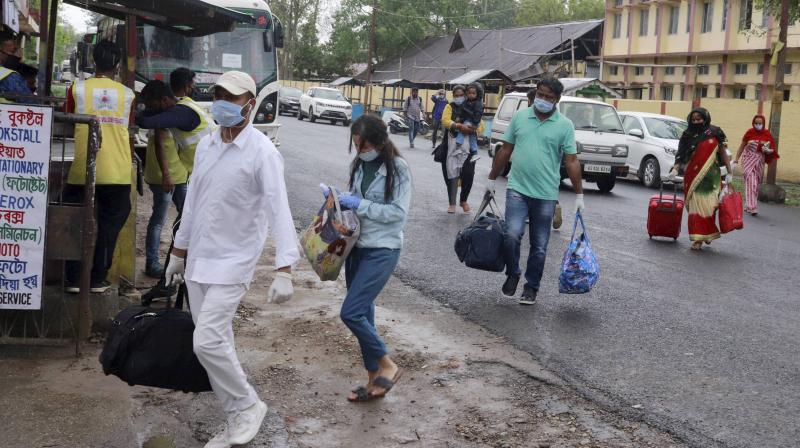 Passengers returning from other parts of India reach Tezpur in Assam. (PTI)

Guwahati: Relatively less troubled by Covid-19 than some of the other states in India, Assam’s composure was broken Friday by two developments.

First, a medical student tested positive for the coronavirus at the state’s biggest hospital in Guwahati, requiring it to be shut down in haste and subject patients and medics to testing and quarantine.

Second, tests done on 42 migrant workers who took a bus from Ajmer to Silchar revealed that seven of them were coronavirus positive. This opened up the possibility that the state may have imported the virus along with the returning workers.

Fighting down panic after the medical students positive test, the superintendent of the state-run Guwahati Medical College and Hospital (GMCH) ordered nearly 700 patients and 386 health workers put into quarantine.

The post-graduate student used to screen patients for COVID-19 symptoms at the hospital. Assam’s health minister told reporters that extensive contact tracing has begun, and samples of all doctors and health workers will be taken for testing.

There is alarm over the places the student used to frequent on campus, such as the room he shared with another student, the hostel dining room and the dorms he used to visit.

Incidence of coronavirus infection has been moderate in Assam so far, and the state is not fully equipped to get some 700 patients plus their attendants tested at once. The minister said the help is being sought of testing laboratories outside the state, perhaps in New Delhi and Kolkata.

The GMCH case took the number of coronavirus cases in Assam to 56. Eleven persons tested positive in the past 24 hours, four in Guwahati and seven in Silchar.

The Silchar positives are worrying the authorities. These seven cases were detected on a bus that brought in 42 migrant workers illegally from Ajmer to Silchar. One of the positive cases is of a child.

Following this detection, the administration has declared at least four villages visited by these passengers as containment zones.

Minister Himanta Biswa Sarma said the passengers have been put in quarantine. He disclosed that the viral load of one of the passengers was found very high.