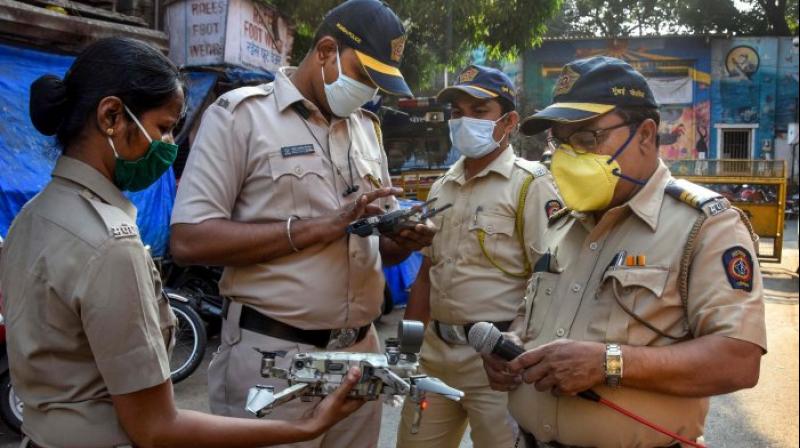 487 police personnel have tested positive for COVID-19 since the lockdown. (PTI Photo)

Mumbai: Maharashtra Home Minister Anil Deshmukh on Thursday said that 487 policemen have tested COVID-19 positive in all over the state ever since the nationwide lockdown came into force on March 24.

Mr Deshmukh in his tweet said, "487 police personnel have tested positive for COVID-19 since the lockdown."

Mumbai police commissioner Param  Bir Singh on Thursday visited J.J. Marg police station in south Mumbai, which is the most affected police precinct in Maharashtra, with 26 policemen, including 12 officers, testing positive for COVID-19. As many as 233 policemen in Mumbai have contracted the deadly infection so far, of which three have died.

While interacting with his officers, Singh said, “The morale of the police force is high. The police have won the battles against underworld, mafia and terrorists during the 26/11 attacks. Similarly, we will win our battle against this invisible enemy.”

In a series of tweets, the home minister also said that there is a steady rise in the number of calls regarding COVID-19 on the police helpline number 100.

The minister added as many as 85,309 calls have been received on the number so far.

The NCP leader also said that 3,10,694 passes have been issued for essential service providers and those caught in emergencies till now. The minister said that 2,24,219 people have been isolated in the state for possible exposure to the coronavirus and 649 were found to be violating the quarantine.

"The state govt's running 4,738 relief camps where 4,35,030 migrant labourers have been given refuge with food & necessities. 1,281 offences have been registered for illegal transport," he said on the micro-blogging site.

The minister added that as many as 96,231 offences have been registered under section 188 of the Indian Penal Code since the lockdown was imposed, leading to 18,858 arrests and seizure of 53,330 vehicles.

"Cumulatively Rs 3,56,81,994 have been collected in fines from offenders. There've been 189 instances of assaults on policemen," Mr Deshmukh said