India   All India  08 May 2019  Big blow to Oppn as SC refuses to modify its order on VVPAT
India, All India

The petition was originally filed challenging the EC’s decision to verify the VVPAT of only one randomly selected booth in a constituency. 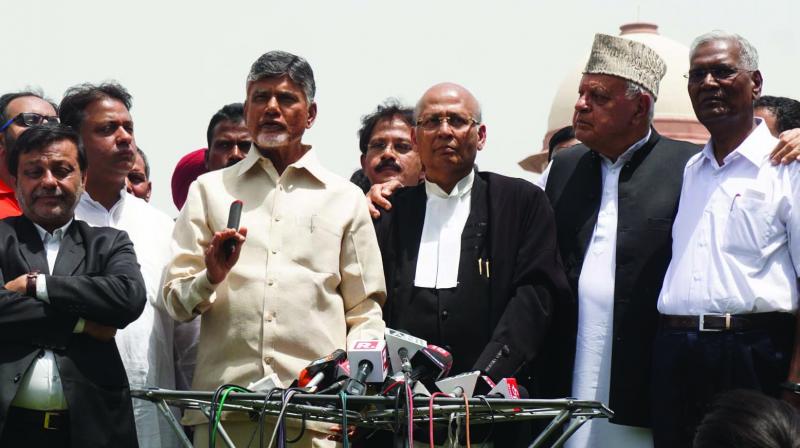 New Delhi: In a severe blow to the Opposition parties, the Supreme Court on Tuesday refused to modify its earlier order and dismissed a review petition filed by Andhra Pradesh chief minister N. Chandrababu Naidu and 20 other Opposition leaders to increase the random paper trail (VVPAT) verification with 50 per cent of EVMs per constituency.

On April 8, the court had partially allowed the original plea, by directing the Election Commission to increase the random matching of VVPAT slips with EVMs to five polling booths from one per Assembly segment in the ongoing general election.

A three-judge bench of Chief Justice Ranjan Gog-oi and Justices Deepak Gupta and Sanjiv Khanna told senior counsel Abhis-hek “Manu” Singhvi, appearing for the petitioners: “We are not inclined to modify our order.”

Mr Singhvi told the court that “an increase from one to five is not a reasonable number, and does not lead to the satisfaction desired by this court”, and the court should review its order. The review plea wanted verification to be hiked to 50 per cent of EVMs per Assembly segment, or at least to 33 per cent. The CJI told the counsel: “Being a review petition, we are not bound to hear you. Petition dismissed.”

The petitioners submitted that the increase to a mere two per cent was not sufficient and would not make any substantial difference to the situation that existed prior to the passing of the impugned order. The petition was originally filed challenging the EC’s decision to verify the VVPAT of only one randomly selected booth in a constituency.

The petitioners say this will account only for 0.44 per cent of the votes polled. This guideline defeats the entire purpose of VVPAT and makes the same “ornamental” without actual substance, they argued. They submitted that once this court agreed that the number of EVMs that should be subjected to VVPAT verification should be increased to a “reasonable number”, not increasing the same to a number which is “reasonable” because it may not be “viable” to do so rendered the entire exercise futile.

Consequently, they that the “viable number” must also necessarily be reasonable. It was pointed out that at many booths in Andhra Pradesh, the VVPAT machines were not working properly. “In the state of Andhra Pradesh alone, polling had to be delayed and deferred in 618 polling booths, and 20 polling booths reported law and order problems.”