Tej Pratap Yadav will be tying the knot with Aishwarya Rai, daughter of party legislator Chandrika Rai, on May 12 in Patna. 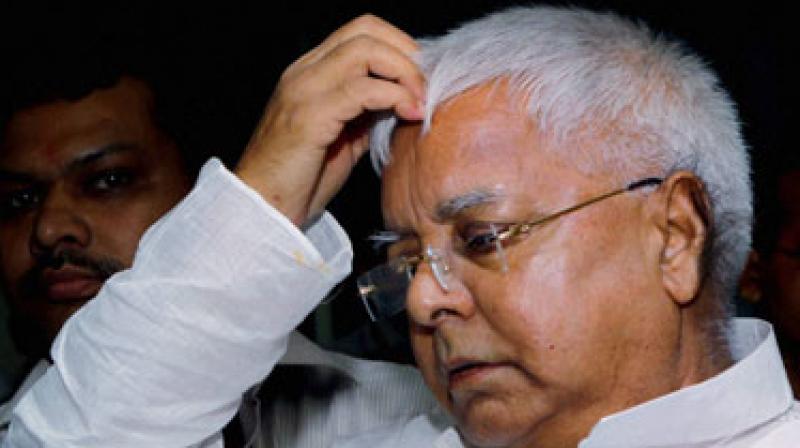 RJD president Lalu Prasad, serving sentence in fodder scam cases, has sought a five-day parole to attend the wedding of his elder son later this week, his lawyer and one of his close aides said on Tuesday. (Photo: File)

Patna/Ranchi: RJD president Lalu Prasad, serving sentence in fodder scam cases, has sought a five-day parole to attend the wedding of his elder son later this week, his lawyer and one of his close aides said on Tuesday.

The septuagenarian Prasad, who has been convicted in three fodder scam cases by a special CBI court at Ranchi since December in 2017, is ailing and currently undergoing treatment at RIMS hospital in the Jharkhand capital. His son Tej Pratap Yadav, a sitting MLA and former state minister, will be tying the nuptial knot with Aishwarya Rai, daughter of party legislator Chandrika Rai, on Saturday, May 12 in Patna.

"We moved an application before the IG, Jail yesterday (Monday) for parole from May 10 to May 14. We hope that our leader will not be deprived of the opportunity to attend the marriage ceremony of his son which is an occasion that comes once in a lifetime," RJD national general secretary and MLA Bhola Yadav told news agency PTI over phone.

Bhola Yadav is close to the entire family of the RJD supremo. He is currently in Ranchi to help the party chief in seeking release from custody.

When contacted, officials of Birsa Munda jail in Ranchi said that they are looking into the request for Prasad's parole and would take an appropriate action.

In Ranchi, Prasad's lawyer Prabhat Kumar also corroborated moving application for parole of incarcerated RJD chief for five days (from May 10 to May 14) for attending his son's marriage.

Last week, Prasad had moved an application for provisional bail before the Jharkhand High Court which got deferred till May 11 on account of a strike by lawyers.

The RJD chief was recently shifted from AIIMS Delhi to Ranchi after doctors their declared him fit. He could not attend the engagement ceremony of Tej Pratap at Patna on April 18 over which his family had expressed sorrow.

Tej Pratap had posted an emotional tweet "miss you Papa."