India   All India  08 May 2018  In India, boy victims of sex crimes don't get talked about
India, All India

In India, boy victims of sex crimes don't get talked about

In the meantime, the minimum punishment for raping a boy is 10 years in jail, compared with 20 years for assaults on girls under 16. 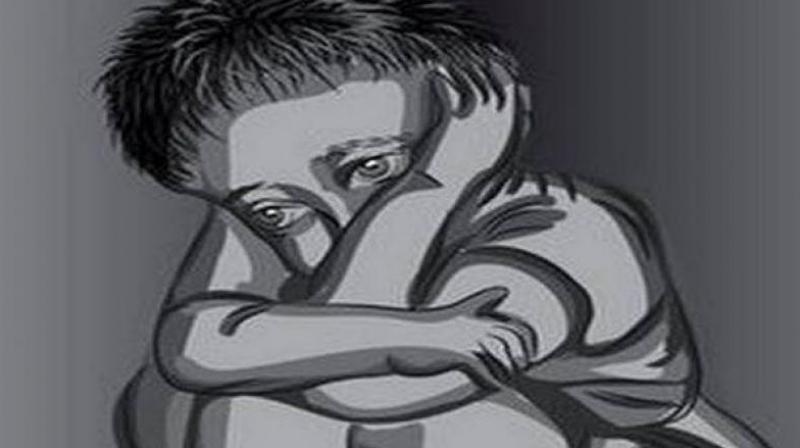 The ministry of women and child development told parliament in March that only 467 male child abuse cases were lodged with police out of more than 36,321 such reported incidents in 2016. (Photo: Representational/AFP)

Mumbai: He was lured into a room near where he played cricket, a man then shut the door and window, and raped him. That's what a 14-year-old Mumbai boy told his mother from his hospital bed in July 2017.

The boy died soon after, killed by the rat poison he consumed after the assault, according to details described to Reuters by his parents and police.

Inspector Balwant Deshmukh, the investigating officer, said police have all but given up hope of finding out who raped the boy. "We will revive the case if we get new clues, but as of now it's in cold storage," he told Reuters.

Prime Minister Narendra Modi's government in April introduced the death penalty for rape of girls below 12 and increased the minimum punishment for those whose victims were under 16, after the rapes of an eight-year-old girl and a young woman in two states ruled by his party led to public protests.

But the emergency order, known as an ordinance, did not mention boys, although a government survey has showed that male minors were more likely to be victims than female minors.

The ordinance lapses in six months and the government has to introduce legislation to convert it into law. At that time, the government plans to broaden the statute to make it gender-neutral, said a senior government official who declined to be named.

"Whatever applies to girls will apply to boys," the official said.

The government's chief spokesman did not respond to requests for comment.

In the meantime, the minimum punishment for raping a boy is 10 years in jail, compared with 20 years for assaults on girls under 16.

"Why this discrimination?" asked the father of the boy who was raped, sitting in his tiny first floor home in a teeming settlement near Mumbai's international airport, largely populated by migrant worker families from India's poor northern states.

Between sobs, the mother recounted her horror at her son's condition in the hospital during his dying days.

"Please get us justice," she said as the interview came to an end.

The boy's medical reports, which were reviewed by Reuters, said their son had been "sodomised". Rape victims and their families cannot be identified under law.

Insia Dariwala, who runs a foundation that raises awareness about child sexual abuse, said police generally lack the sensitivity to deal with cases of assaults on boys.

"I have interacted with adult male survivors and social workers who have cited police hostility, ridicule and even lack of trust when it comes to believing that a boy was sexually abused," she said. "The most common perception dished out to male survivors is that they may have enjoyed it."

The Mumbai police investigating the boy's rape, however, said officers are regularly trained on how to handle sexual abuse of children of both genders. The federal government is also running workshops for police that cover all children, said Stuti Kacker, head of the government's National Commission for Protection of Child Rights, which advises on child-related policies.

Some activists working for the safety of children say outrage over the gruesome gang rape and subsequent death of a young woman in New Delhi in 2012 succeeded in raising awareness about sexual violence against women in India, but far less attention is paid when the victims are male.

A 2007 survey by the ministry of women and child development, which sampled 12,447 children in families, schools, at work and living on the street, found that more than half had faced sexual abuse, and 53 per cent of victims were boys. For the capital Delhi, the figure was 60 per cent.

The government has not done any similar survey after that, although some activists and police say many cases of sexual abuse of boys go unreported because of the stigma attached to homosexuality.

The ministry of women and child development told parliament in March that only 467 male child abuse cases were lodged with police out of more than 36,321 such reported incidents in 2016.

The government, nevertheless, last month ordered a study to be undertaken focusing on sexual assaults on boys.

"Boys who are sexually abused as children spend a lifetime of silence because of the stigma and shame attached to male survivors speaking out," Maneka Gandhi, the minister for women and child development, said in a statement.

"It is a serious problem and needs to be addressed."

'Boys not seen as victims'

In India's patriarchal society, girls typically have a more restricted upbringing than boys and spend less time outdoors, making it easier for predators to target boys, according to social workers and others who counsel victims of sexual abuse.

A 22-year-old man in Pune, who said he was repeatedly raped by a man for two years starting when he was five, reported his ordeal to his parents only a year ago fearing he would be judged.

"I kept going back to the park where I would get raped by this man," said the young man, who was counselled by the child abuse awareness foundation's Dariwala and agreed to be interviewed by Reuters. "I was scared of him but did not want to stay at home and come across as lazy in front of my parents. I did not want to anger my mom."

Reuters could not verify the details given by the man.

Some researchers say parents often shy away from reporting abuse of boys, in the hope that victims would eventually overcome the psychological trauma.

The Pune man said his parents asked him to "move on and not let this incident define you". He declined to immediately share their contact details, saying it was a delicate matter for them.

An article published in 2017 in the Indian Journal of Psychiatry highlighted those attitudes.

An unidentified father who was resistant to psychological care for his nine-year-old son after he had been raped, was quoted by the journal as saying: "He neither lost a hymen nor will get pregnant. He should behave like a man, not a sissy."

Vyjayanthi KS Subramaniyan, a senior psychiatrist in a Bengaluru hospital who co-authored the report, said she was in touch with at least eight adult men who were sexually assaulted as boys but never reported their ordeal to police.

"Boys don't fit into the image of a victim. In a patriarchal society they are expected to take it in their stride," she told Reuters. "They think that as he grows up, he is going to become invulnerable, without any need to work on his psyche. That's ridiculous."

The officer in charge of the police station where the rape and suicide of the boy in Mumbai was registered said that current data under-estimates the scale of the problem as boys' parents are reluctant to come forward.

"We don't discriminate on the basis of gender, but people come to us only in extreme cases," Senior Inspector Anil Pophale told Reuters. "This incident would not have been reported if the boy had not committed suicide."

The father of the dead boy agrees that he would never have gone to police had his son not decided to kill himself and says he now realises his mistake.

"It needs to change," he said, referring to the reluctance of parents to report abuse of male children. "This (tragedy) should not happen to anyone else."