India   All India  08 May 2018  In Assam, retired teacher speaks on poor roads, Union Minister cuts him off
India, All India

In Assam, retired teacher speaks on poor roads, Union Minister cuts him off

Union Minister Rajen Gohain termed the teacher's allegations as 'utter nonsense' and also questioned his intentions to bring up the issue. 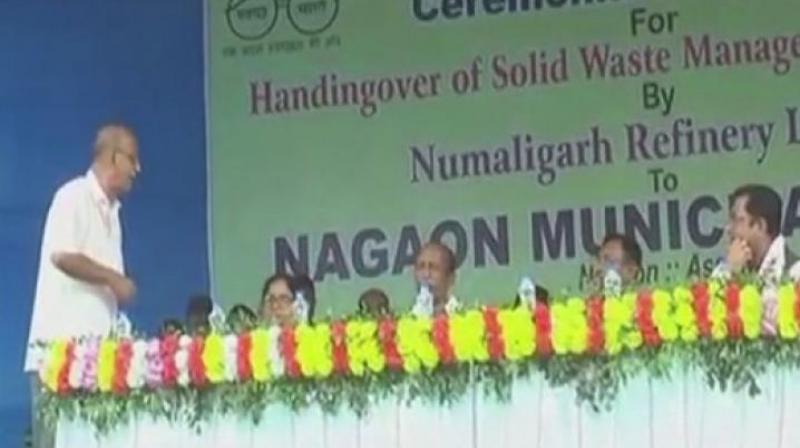 The retired teacher was lamenting the poor condition of roads in his area and hoped that the new goverment will take steps in taht direction (Photo: ANI)

Nagaon: Union Minister Rajen Gohain courted controversy at a Swachh Bharat Mission program in Assam's Nagaon on Monday, when he interrupted a retired teacher who was speaking on the poor condition of roads in his area, and questioned his intention behind bringing up the issue in front of the media.

During the program, speeches were delivered by various officials and senior members of Nagaon and in his turn, the retired teacher said, "Over the years, the locals in Amolapatty's BB Road sub-way have been suffering a lot due to the poor road conditions but they still hope that the new government and new MLA will take steps for improving the roads. I have been submitting applications over the time but no initiatives have been seen."

Before he could continue, Gohain interrupted him saying, "Why don't you talk about this with the officer concerned? The main roads are the priority for the municipality."

The Assamese Minister termed the teacher's allegation as "utter nonsense" and even questioned what his actual motto or intentions were as he was trying to bring up these issues in a public meeting in front of the media.

The teacher tried to answer Gohain's question by speaking on the microphone but the Union Minister did not give him the opportunity and said, "Problems do not get solved by delivering speeches."

He told the teacher that if he had any complaints he should have approached Gohain personally and not in front of the public.

In the wake of the incident, the All Assam Students Union (ABSU) on Tuesday staged a protest and burnt effigies of Gohain.