India   All India  08 May 2018  After dust storm, Delhi-NCR brace for thunderstorm, gusty wind
India, All India

The government also issued a list of 'dos and don'ts' to deal with any such possible situation. 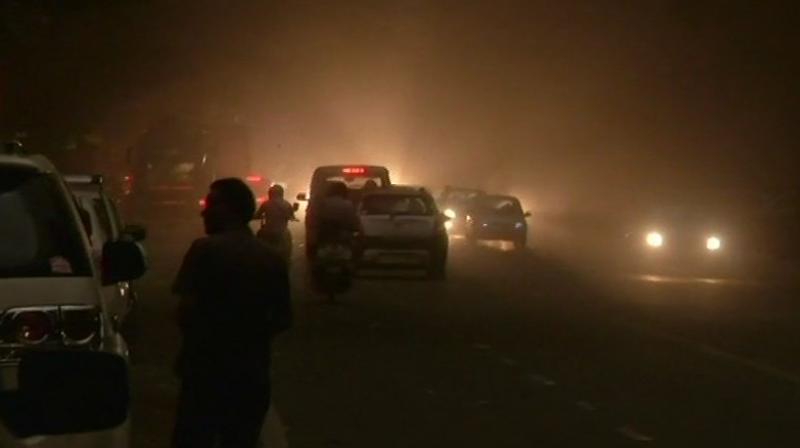 New Delhi: A dust storm, with a wind speed of 70 kilometres per hour, hit the national capital on Monday night followed by a squall, bringing down the temperature after a hot day, the weatherman said.

The high-velocity wind swept through Delhi around 11.15 pm, an official at the Safdarjung observatory said.

The MeT department had issued a warning message at 8.53 pm, saying a spell of rain/thunderstorm accompanied with squall is likely to occur over Delhi and NCR during in the next three-four hours.

It has forecast rains and gusty winds for Tuesday as well.

It was a hot day in the national capital with the maximum temperature settling at 39.6 degrees Celsius, a notch above the season's average.

#WATCH: Dust storm hits Delhi's RK Puram. According to India Meteorological Department (IMD) a spell of rain/ thunderstorm accompanied with squall (wind speed 50-70 kmph) likely to occur over Delhi and NCR during next 3 to 4 hours. pic.twitter.com/xXc7AHHs5T

Earlier in the day, the Delhi government decided to close all evening schools on Tuesday and put search and rescue teams on standby in the wake of the meteorological (MeT) department issuing a warning of heavy rain and thunderstorm.

The traffic police has alerted their field formations to be ready to remove obstacles such as fallen trees and asked commuters to check weather conditions before travelling.

The Delhi Metro, too, has decided to exercise extreme caution in running of trains in the wake of the warning.

The government said that all evening schools (second shift which starts from the afternoon) will be shut on Tuesday after chief secretary Anshu Prakash chaired a high-level meeting to review the preparedness in the wake of the warning.

The government has also asked other schools not hold outdoor activities and extracurricular activities between 3 pm to 7 pm during which winds speed is expected to remain high.

The government also issued a list of "dos and don'ts" to deal with any such possible situation. The Department of Education later also issued a circular on the issue.

The India Meteorological Department (IMD) on Monday issued an alert forecasting that several parts of north India including Delhi could witness thunderstorm and squall tomorrow with winds gusting up to 50-70 kilometers per hour.

Officials of the fire, revenue, traffic police, home, public works departments and others were present in the meeting chaired by the chief secretary.

In the list of "dos and don'ts", the government has advised citizens to try to stay indoors and staff off verandas and keep a watch on local weather updates and warnings.

The government also asked people to ensure that children and animals are inside and unplug unnecessary electrical appliances. The advisory also asked citizens to avoid taking a bath or shower or running water for any purpose.

"This is because lightning can travel along pipes. Keep away from doors, windows, fire places, stoves, bath-tubs, or any other electrical charge conductors," the advisory stated.

Earlier in the day, the revenue department of the Delhi government has issued directions to all district officers and said water and power utilities would also keep restoration teams ready.

"The district and sub-district search and rescue teams have been put on standby," a senior official of the department said.

The Delhi Metro Rail Corporation (DMRC), which operates trains in the national capital and NCR, said it would exercise extreme caution in running of trains.

"If wind speed is reported in the range of 70-90 kmph then train movement will remain normal but trains will enter with a restricted speed of 40 kmph or less at the platforms on elevated section.

"If wind speed is reported more than 90 kmph then trains will be put on hold at platforms and no train will enter platform with a speed of more than 15 kmph," a senior DMRC official told PTI.

In this case, normal movement of trains will be restored once the wind speed is reported less then 85kmph for continuous five minutes.

Appropriate announcements will be made at stations during this period, he said. At the same time, the Delhi Traffic Police has advised commuters to plan their journey after checking the weather conditions.

The Delhi Traffic Police's advisory states that it has alerted the field formations to be ready to get obstacles such as fallen trees removed. The advisory has asked commuters to avoid travelling during the storm.

The advisory said that commuters should "keep themselves updated about weather conditions and plan their journey accordingly".

At least 124 people were killed and more than 300 others injured in five states due to dust storms, thunderstorms and lightning last week.