India   All India  08 Apr 2021  Photograph of CRPF commando captured by Maoists is one year old; could be a ploy
India, All India

Photograph of CRPF commando captured by Maoists is one year old; could be a ploy 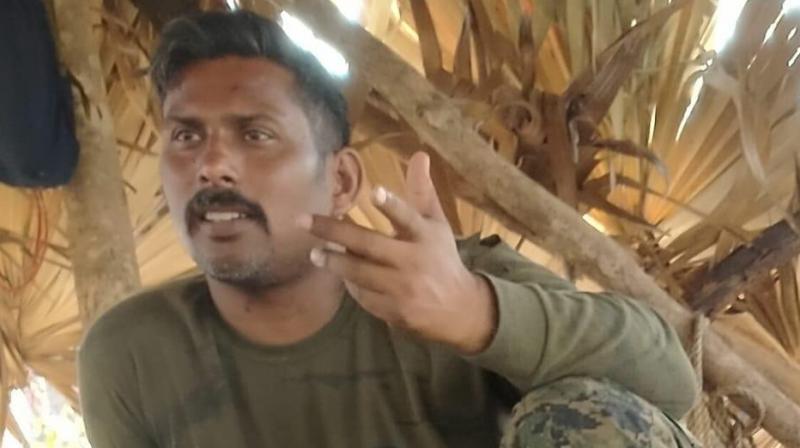 Manhas went missing after a joint team of the CRPF and two other security forces clashed with Maoists at the borders between Chhattisgarh’s Sukma and Bijapur districts on Saturday. (Photo: ANI)

SRINAGAR: The family of the Central Reserve Police Force (CRPF) jawan who went missing during a deadly encounter with the Naxalite–Maoist militants in Chhattisgarh at the weekend has said that his photograph doing the rounds on an instant messaging platform is almost 12 months old.

It rejected the claims that it was snapped and released by Maoists after taking CRPF’s Rakeshwar Singh Manhas, a resident of Jammu, "captive". Manhas went missing after a joint team of the CRPF and two other security forces clashed with Maoists at the borders between Chhattisgarh’s Sukma and Bijapur districts on Saturday. As many as 22 security personnel were killed and many more injured during the encounter. However, the CRPF's Director General, Kuldiep Singh, had claimed inflicting huge losses on the Maoists. He also said there is no confirmation yet that Manhas has been held captive by Maoists.

The missing contable's family members, friends and neighbours held a protest demonstration along the Jammu-Poonch National Highway on Wednesday, demanding his safe release and strong action against Maoists. His cousin Praveen Singh Manhad said that the photograph of the missing jawan that has surfaced on social media with the message that he is safe in captivity is almost a year-old. "I had seen it on his phone during his last visit to home,” he told reporters. He added that releasing the photograph through a social networking platform could be a "ploy" by Maoists.

He echoed the sentiment of Manhas's family and friends and said, "Our anxiety is increasing with every passing hour. We're concerned about his safety and security and urge the government to take swift and stern action to secure his return and against the Maoists."

A report said that several journalists in Chhattisgarh received the photo on their WhatsApp on Wednesday. The sender claimed that Minhas was not hurt in the captivity of Maoists.