India   All India  08 Apr 2020  Decision on lifting lockdown left to PM but no schools or public events till May 15
India, All India

Before taking his decision, Modi will take inputs from a review meeting on April 11 or 12 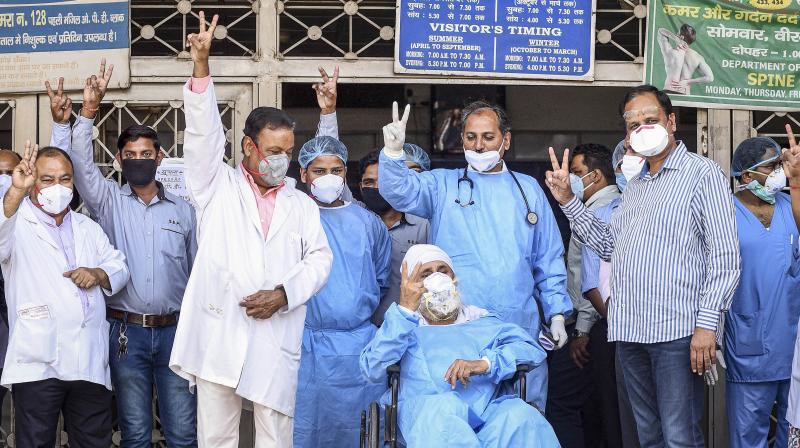 Eighty-two-year-old Manmohan Singh, in a wheelchair, comes out from the Lok Nayak Jai Prakash Narayan (LJNP) Hospital in New Delhi on Tueday amid cheers from doctors and medical staff after he fully recovered from Covid-19. The elderly are among the most vulnerable groups. (PTI)

New Delhi: The Centre is learnt to be considering extending the nationwide lockdown beyond April 14 to contain the spread of Covid-19 after requests from several state chief ministers and health experts, but it will take a final call only after a review meeting chaired by prime minister Narendra Modi, which could take place on April 11 or 12.

Top government sources said the Prime Minister’s Office (PMO) is now working on a graded plan to lift the lockdown in a phased manner. If no fresh cases have been detected in any hotspot in the 75 identified districts, it could ease the lockdown in those areas.

A Group of Ministers (GoM) on Covid-19 headed by defence minister Rajnath Singh, which met earlier on Tuesday, recommended the extension of the closure of all educational institutions and restricting all religious activities with public participation till May 15 irrespective of the government’s final decision on the lockdown, official sources said.

It was decided at the meeting, also attended by home minister Amit Shah and finance minister Nirmala Sitharaman, among others, that religious centres, shopping malls and educational institutions must not be allowed to resume normal working for at least four weeks from April 14, when the current lockdown is due to end, till around May 15.

Sources said it was felt within the GoM that a partial relaxation could be effected in the lockdown, but it was up to the PM to decide.

The PMO got inputs from almost all chief ministers on easing of the lockdown after April 14, with almost all unanimous about easing it in a phased way. With Modi set to discuss the matter with all political parties on Wednesday, a review meeting could be held on April 11 or 12, where would take a final call after seeking a political consensus.

Sources told this newspaper that the government will start random testing across India from Wednesday (April 8) to check the intensity of the virus spread and identify more hotspots to implement the graded plan. The government has already identified hotspots.