Under united oppn, Modi may even lose Varanasi in 2019: Rahul Gandhi

Hitting out at Modi and the BJP, the Congress president said they have lost track of running the country. 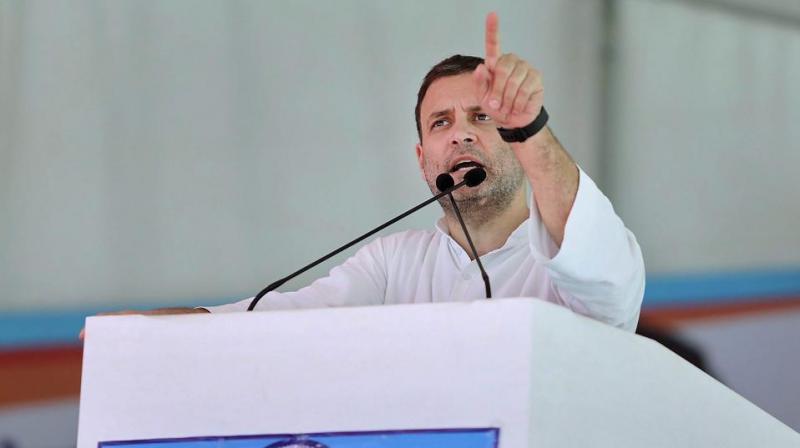 Rahul predicted for the current ruling dispensation, a "collapse" not "seen in many years." (Photo: PTI)

Exuding confidence over roping in and managing alliance partners despite their varied personal and regional aspirations, Gandhi predicted for the current ruling dispensation, a “collapse” not “seen in many years.”

“Frankly, I don’t see the BJP winning the next election, so in 2019 we will go back to the normal, I sense,” he said in reply to a question on “Dalit anger.”

“...because there are two basic things, once opposition unity goes above a certain level, it becomes impossible to win elections. Now the opposition unity has gone to a point. It’s simple,” Gandhi said at an informal media interaction.

Pointing at the opposition unity efforts in Uttar Pradesh, Bihar and by the DMK, the Trinamool Congress and the Nationalist Congress Party in Tamil Nadu, Gandhi asked, “Where are they (BJP) going to win seats?”

“And in Rajasthan, Chhattisgarh, Madhya Pradesh, Gujarat, Haryana, Punjab. We will take it over. You are going to see a collapse of the style you haven’t seen in many years,” he said.

Gandhi was on the sixth leg of campaigning as part of the ‘Janashirvada Yatra’ ahead of the May 12 polls in Karnataka.

Responding to a question doubting the forging of opposition unity amid varied aspirations of each party and their leaders, Gandhi expressed confidence of overcoming it.

The basic thing is how to get the country out of the “mess that Modi and RSS has putit in,” he said.

The Congress president also ruled out emergence of any third front.

Accusing the RSS of generating anger and hatred, Gandhi alleged that people are being killed for what they are saying and that needs to be put to an end.

“The natural sort of political environment where there is a little bit of acrimony, but not hatred, needs to be restored,” he said.

Stating that Modi had a “very good” opportunity after the 2014 election, Gandhi said a lot could have been done for the country.

Terming as “funny” the BJP’s confidence of breaking the opposition alliance in Uttar Prdesh and claiming that he understands UP politics, Rahul said when the three parties (SP, BSP and Congress) come together, “BJP will win only two seats, that too with luck.

He said even Modi may lose if he stands from Varanasi and the three parties were united against him.

“In fact, I challenge him to stand with three parties united,” he added.

The BSP and the SP jointly fought Gorakhpur and Phulpur Lok Sabha seats during the recent bypolls, costing the BJP both the seats, vacated respectively by Uttar Pradesh chief minister and deputy chief minister.

Hitting out at Modi and the BJP, the Congress president said they have lost track of running the country.

“You can’t run this country as an individual, you have to run this country by listening to it, by working with it... and now after four years, he (Modi) has suddenly lost it, because now the wheels are running on them. Everybody can see that, you can hear it in his speeches,” he said.

Responding to a question, Rahul blamed the “mentality” for Modi and BJP losing track.

He said, “...it is the mentality... you stand in front of Basavanna (12th century social reformer from Karnataka) or Ambedkar, praise them, and then you destroy everything that they stood for...”

“Basavanna is an idea, he is the representative of idea of Karnataka, you can go and stand in front of his statue as much as you want, but it won’t work if you are destroying the idea... so, it is the mentality...” he said.

Sharing his experience in Gujarat, he said those raising “Modi Modi” slogans were nice to him when he met them and claimed they were “paid” for their sloganeering.