India   All India  08 Apr 2018  Salman gets bail, back in Mumbai as fans celebrate
India, All India

Salman gets bail, back in Mumbai as fans celebrate

The next hearing in the case will take place on May 7 and Mr Khan will have to be present in court that day. 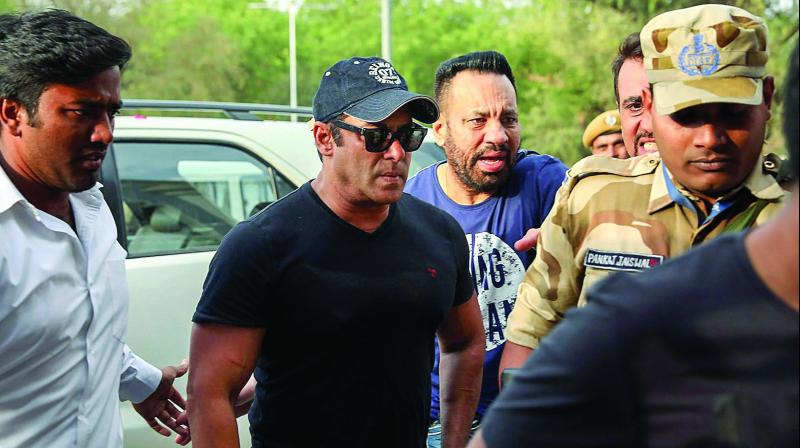 Actor Salman Khan at Jodhpur airport after he was granted bail in the 1998 blackbuck poaching case. (Photo: PTI)

Jaipur/Mumbai: After spending two nights in Jodhpur jail, Bollywood star Salman Khan walked out on bail on Saturday in the 1998 blackbuck poaching case in which he was held guilty and sentenced to five years’ imprisonment.

Accepting Mr Khan’s application for suspension of his five-year jail sentence for a month, district and sessions judge Ravindra Kumar Joshi granted him bail on a personal bond of Rs 50,000 and two sureties of Rs 25,000 each. The court has restrained Mr Khan from leaving the country.

The next hearing in the case will take place on May 7 and Mr Khan will have to be present in court that day. Ecstatic fans burst firecrackers and sang songs from his films as Mr Khan, 52, stepped out of prison. He reached his Mumbai home by evening where a frenzied crowd greeted him.

Mr Khan was arrested in court on Thursday after the trial court held him guilty of killing two blackbucks during the shooting of Hum Saath Hain Saath in Kankani village near Jodhpur on October 1, 1998.

The Bishnoi community, which reveres the blackbuck, has decided to move the Rajasthan high court challenging the bail granted to Mr Khan, according to Ram Niwas, the secretary of the Bishnoi Tiger Force.

The actor’s sisters, Alvira and Arpita, and bodyguard Shera were present in court when judge Joshi heard arguments of the prosecution and the defence on Mr Khan’s bail plea. The proceedings lasted about an hour and the bail order was pronounced around 3 pm, a defence counsel said.

Public prosecutor Pokerram Vishnoi opposed Mr Khan’s bail application claiming that the post-mortem report and statements of witnesses had clearly proven that Mr Khan had killed the blackbucks with a gun.

Seeking bail, Mr Khan’s lawyers argued that he had been out on bail during the 20-year-long trial and had always abided by the court’s order and appeared in the court whenever asked to do so. They also offered to accept all bail conditions.

In its 10-page bail order, the court said the trial judge had acquitted Mr Khan’s Bollywood colleagues — Saif Ali Khan, Tabu, Neelam and Sonali Bendre and a local, Dushyant Singh — giving them the “benefit of the doubt” over the incident.

It also cited the differences in the two post-mortem reports of the blackbucks, with the first saying that there was no gunshot injury and the second stating that the animals were killed by gunshots.

The court noted that the high court had also raised suspicion over the recovery of a car, pellets and arms from the actor in the two other poaching cases against him.

Earlier in the day, there was suspense over whether judge Joshi could preside over the hearing on Mr Khan’s bail plea as he was among the 87 judges transferred on Friday night by the Rajasthan high court.

“A judge, even if transferred, can hear a matter, more so if it is an urgent matter like bail. There is nothing extraordinary about it. It is a normal procedure,” said senior lawyer Yashpal Madan.

Mr Khan’s bail application was filed on Friday and judge Joshi had heard the matter but deferred his decision for Saturday as he wanted to go through the trial court’s records.

Apart from the Kankani village case, in which Mr Khan was sent to jail on Thursday, two separate cases had been registered against him for poaching of two chinkaras in village Bhawad on September 26, 1998, and one chinkara in Ghoda Farm on September 28, 1998.

In Bhawad and Ghoda Farm cases, he was acquitted by the Rajasthan high court on July 25, 2016. On January 18, 2017, Salman was acquitted by a magistrate in the Arms Act case related to the alleged poaching.

After Mr Khan was granted bail on Saturday, his friends and well-wishers from the film industry expressed their happiness over the decision.

Remo D’Souza, director of Salman’s upcoming film Race 3 said, “I am happy that he has got bail. After working with him so closely I have become a huge fan of him not only as an actor but also as a human being.”

The scene outside the actor’s home in Bandra’s Galaxy Apartments on Saturday afternoon was one of joyful frenzy. His fans from various parts of the country gathered outside to greet him. They came with dhols and nagaras and danced outside his house. Many held banners in their hands as chants of “Bajrangi Bhaijan” and “Salman zindabad” rent the air.

At 8.25 pm, Mr Khan came out to the balcony of his house and waved to his fans, thanking them for their support. Flanked by his father Salim Khan, mother Salma and his bodyguard Shera, the actor who was clad in a black T-shirt, then requested all his fans to go home and sleep quietly.