The awards also saw Bollywood movies such as Pink, Neerja and Dangal score in key categories. 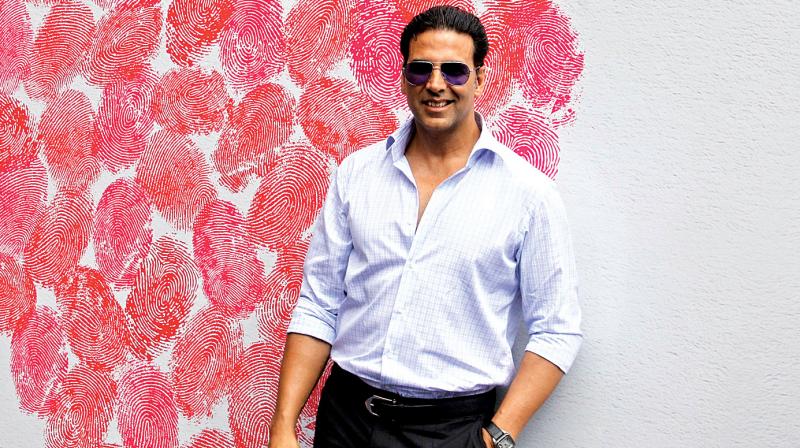 The awards also saw Bollywood movies such as Pink, Neerja and Dangal score in key categories. Akshay, 49, took to Twitter to express his gratitude over his surprise win.

“Thank you is a very small word right now but I don’t know how else to express how I am feeling right now... ‘Rustom’ was a very special role to play. Being able to wear the uniform of Indian Navy itself is a huge honour, even if it’s just for a role,” Akshay said in a video message.

The actor said Sonam Kapoor, who received a special mention for her role in Neerja, was shooting with him and it was a double celebration for them on the sets of Padman.

Neerja, directed by Ram Madhvani, was named the best Hindi film. It is based on the 1986 hijacking incident during which flight attendant Neerja Bhanot was killed by terrorists while saving passengers. “This is huge. Here is to Neerja Bhanot and her family,” Madhvani told agencies.

Amitabh Bachchan-starrer Pink, a female-centric courtroom drama, won the award for best film on social issues. Producer Shoojit Sircar dedicated the award to his team and Bachchan, saying it would not have been possible to make the female-centric drama without the actor’s support. 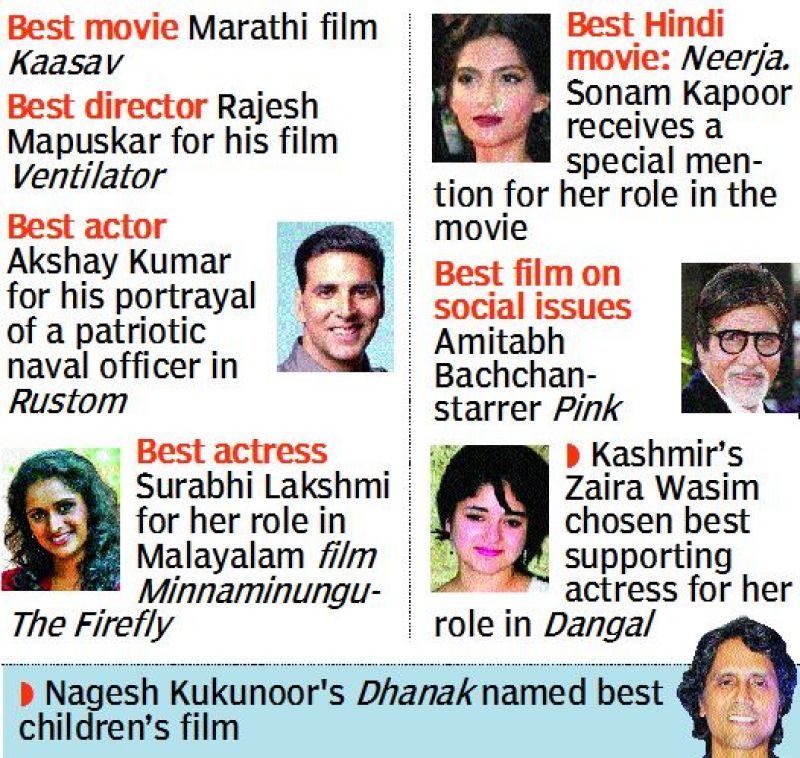 The 11-member jury, headed by filmmaker Priyadarshan, named Surabhi C.M. as the best actress for her role in Malayalam film Minnaminungu-The Firefly.

“I never expected this award. I expected only a jury mention. I am extremely happy and stunned,” Surabhi, who is away in Muscat as part of a programme, said.

“Kasaav”, this year’s best feature film winner by Sunil Sukhtankar and Sumitra Bhave, revolves around the issue of depression and environment conservation. The film’s team is hopeful that the win will give the movie a much-deserved boost ahead of its release.

“Kasaav got the best film award which is a great thing but another point of happiness is that the film deals with the theme of depression. The award definitely gives a boost to Marathi cinema. It is a proud moment for us,” co-director Sunil Sukthankar said.

Besides Kasaav, Rajesh Mapuskar won the best director award for his film Ventilator. The movie, produced by actress Priyanka Chopra and her mother Madhu, won three awards. Ventilator also won the best editing and the best final mixed track award. The best adapted screenplay went to Dashakriya, which was also chosen as the best Marathi film, while its star Manoj Joshi was named the best supporting actor.

The state of Uttar Pradesh was chosen as the most film friendly state. Tamil movie 24 won for the best cinematography and production design.

Mahayodha Rama won the best animation film award while Loktak Lairembee won the best environment conservation /preservation. Hindi films Kadvi Hawa and Mukthi Bhawan received special mentions. The National Film Awards will be handed out to the winners by President Pranab Mukherjee in a ceremony on May 3.