When women succeed, we all do too

The new female role models that the law created had a dramatic impact on families and younger women. 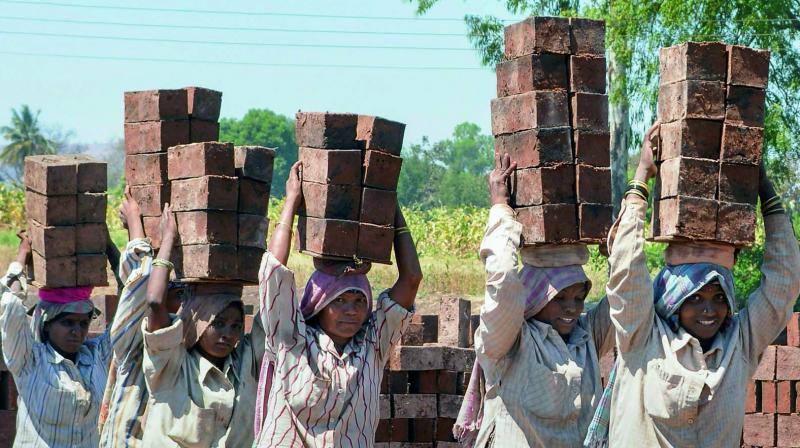 A group of brick factory workers carry bricks on their heads ahead of International Women’s Day in Karad, Maharashtra. (Photo: PTI)

Not long after Nirmala Geghate took over as sarpanch in Wanoja, a remote hamlet in northern Maharashtra, groups of young men stopped hanging out in front of the shop at the village square, where they used to ogle and catcall female labourers who walked by in dusty saris.

There were several ripple effects of the newfound women power in the village. Enrolment of girls in the local school increased. A mother asked for and received a mobile phone from her husband, which is a rare luxury for rural females. Other women who had been confined to their homes were suddenly allowed to venture outside the village boundaries for the first time.

A unique policy experiment in village-level governance that mandates one-third representation of women in positions of local leadership has revolutionised gender status across millions of villages in India. In 1993, the government brought in an epochal legislation called the “Panchayati Raj Act” it introduced statutory quotas that requires a third of all members in gram panchayats (village councils) be female. These councils take decisions on every important subject in the rural political life. Once the sole preserve of men, panchayats now have women members and leaders, who are challenging feudal traditions and redefining the way councils are run. In this process, they are also learning some important political lessons.

This new law was the fruition of Gandhiji’s dream, to see local governance and gender justice being managed by village self-republics that have a purely localised approach. Gandhiji believed that the “Panchayat Raj” system would obviate the feelings of alienation for locals and preclude the external intervention of higher-level urban civic officials. He strongly believed that those urban civic officers may not be familiar with the concerns of the local populace and may not share the same level of emotional attachment.

The new female role models that the law created had a dramatic impact on families and younger women. Today in villages, there is a discernible opening in the political space for women: not the sort of earthquake anticipated by the government, but a million tiny changes, each of which was inconceivable in the era before the quotas.

These newly-minted panchayat leaders are concentrating much more on women-centric issues such as clean water supply, sanitation and education than their male counterparts. Their major concerns include construction of toilets, cleanliness and hygiene of villages, education for women and the problem of alcoholism.

However, this devolution of power has not been as seamless as it seems. Rural India is one of the world’s most diverse areas, constituting 833 million people who speak more than 700 different languages among them. To invoke cultural changes in these areas is no less than fighting for a revolution, but the restraining forces seem to be ebbing. Still, untouchability, feudalism, bonded labour, extreme caste, gender oppression, exploitation and land grab are few of the afflictions that must be eliminated completely if Indian women are to spend their lives fairly and peacefully.

Many of these leaders started as “showpiece” elected women representatives, but over time, they have developed into proactive people’s representatives who are keen to strive for local development based on their own unique understanding of the needs and aspirations of people. When these seats are coupled with new skills from public speaking to budget management, they are better prepared to negotiate within the political space that has opened for them.

The most important feature of good local governance is participation. People not only vote every few years; they have a direct voice in decision-making and governance through public forums, citizen committees and voluntary action campaigns. However, in large swathes of rural India, representation has not necessarily translated into active engagement in the political space. Women still face a number of challenges including inadequate education, the burdens of productive and reproductive roles, financial dependence and an entrenched belief system that sees them as inferior to men.

India’s experience demonstrates that putting women in leadership positions can catalyse the change process. Although the first generation of women leaders had to cope with entrenched mores and traditions that left them locked into purely domestic roles, their presence in local organisations and committees has convinced the Indian masses of a woman’s ability and potential to lead.

There was a time when women were just titular heads, with their husbands, dubbed sarpanch patis who wore the crown and run the show. Most of those elected women were proxies for their husbands or fathers. They either sat mutely beside the male family member who made the decisions at meetings or they simply did not attend.

By increasing exposure to nontraditional leaders, the reservation system has changed voters’ attitudes in regards to the ability of disadvantaged groups to lead. The quota system, beyond its immediate impact on gender balance among leaders, is now having long-term effects on the status and roles of women in the conservative Indian society by changing perceptions of their leadership capabilities and shaping beliefs about what they can achieve.

Women panchayat leaders are focusing on building separate bathrooms for girls. As studies have shown, this will directly reduce the number of female dropouts after puberty. They ensure the delivery of safe drinking water to all students. Even though these may sound like simple palliatives, in reality, they are necessary developments in rural education.

It is clear that women’s leadership in panchayats is transforming India. The presence of a female leader in the village significantly increased the level of aspirations held by families for their daughters and female adolescents. They have also improved educational outcomes for adolescent girls, which will improve the labour market over time and help bridge the ratio of male-female working population in India.

Rohini Pande, a professor of public policy at Harvard University’s Kennedy School of Government, finds that the quota system results in big aspirational gains for girls in those locations. Her research showed that compared with places that did not have a quota, the gender gap in aspirations closed by 25 per cent in parents, and 32 per cent in teenagers in villages assigned to a female leader for two election cycles. In Professor Pande’s own words: “It’s not that they put women on the council and attitudes changed overnight; these attitudinal changes were gradual. But our research shows that perceptions of women as leaders improve. Seeing a woman in the village meeting has a big effect.”

In the long term, the journey is going to be harder and tougher than any policy wonk can imagine. The wait could potentially be eternal. Legislation and policy pronouncements seldom penetrate the surface of social and political barriers and are ultimately impotent against the grid of the established power structures inherent in most rural Indian households and villages.

The vision is truly not as romantic as many would like us to believe, but as women have shown, they have all that is needed to ride out every storm. The men know this very well, but they don’t want to concede that women possess the ability to be the better halves because they are afraid of losing their last refuge — politics.

The writer is author of Village Diary of a Heretic Banker