The incidents come day after PM Modi strongly condemned acts of vandalism and spoke to Rajnath Singh over the issue. 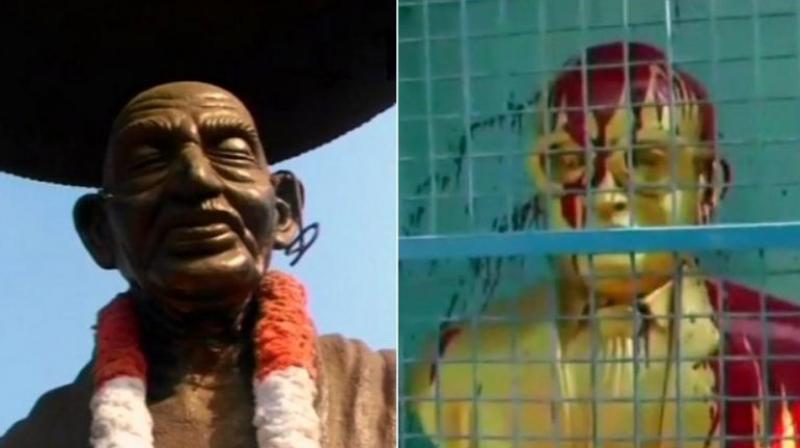 A statue of Mahatma Gandhi was defaced by an unidentified person in Kerala, while unidentified miscreants poured paint on the bust of Dr BR Ambedkar in Tiruvottiyur, Chennai. (Photo: Twitter | ANI)

Kochi/Chennai: Prime Minister Narendra Modi’s strong condemnation over incidents of vandalism of statues in various parts of the country seems to have no deterring effect on miscreants. According to latest reports, a statue of Mahatma Gandhi was defaced by an unidentified person in Kerala on Thursday morning, while unidentified miscreants poured paint on the bust of Dr BR Ambedkar in Tiruvottiyur, Chennai on Wednesday night.

According to reports, the statue of Mahatma Gandhi at taluk office in Taliparamba in Kannur district of Kerala was defaced at around 7am on Thursday. Unidentified miscreant broke the spectacles, damaged the garland and hurled stones at the statue.

The police have launched an investigation into the case.

The incidents come a day after Prime Minister Narendra Modi strongly condemned such acts of vandalism and spoke to Union Home Minister Rajnath Singh over the issue.

There have been numerous incidents of statues being vandalised in various parts of the country. It started with the pulling down of a statue of Vladimir Lenin with the help of a bulldozer in Tripura after Left Front’s debacle in the state assembly polls, the results of which was declared on Saturday. Another statue of Lenin was vandalised in the state as well.

Following this, a statue of Dravidian ideologue ‘Periyar’ EV Ramasamy was damaged in Tirupattur in Tamil Nadu. Two people – one from BJP and the other from CPI – were arrested in connection with the incident.

On Wednesday, a statue of Bharatiya Jan Sangh founder Syama Prasad Mookerjee in West Bengal and one of Dr BR Ambedkar in Meerut in Uttar Pradesh were also vandalised.