To celebrate this achievement, a ceremony was also organized and all crew members of these flights were felicitated by the Air India. 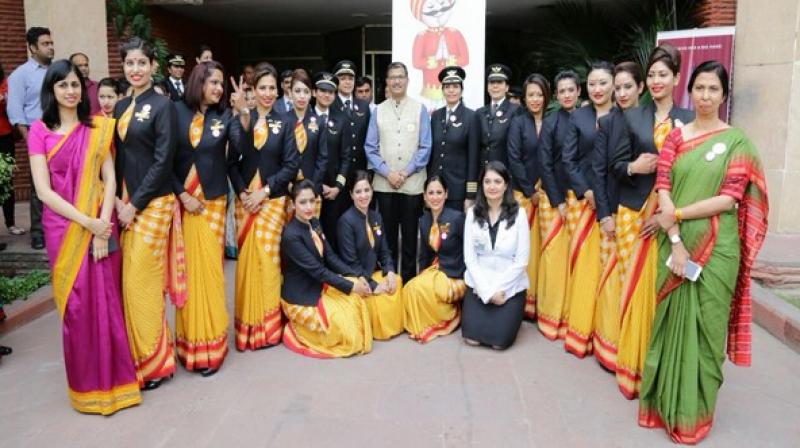 New Delhi: Celebrating International Women's Day in a historic way, Air India is flying more than ten all women crew flights on its international and domestic routes from February 26 to March 8.

Air India will on Wednesday be taking around 50 women on 'Joyride' from Delhi to Agra on its ATR-72 aircraft that is operated and supported by all women crew.

On this occasion, the women employed with Air India operated all types of wide and narrow body aircrafts in its fleet.

Air India is also going to organize a unique tour from Delhi to Agra for those women, who have never flown in spite of their engagement with aviation sector from many years.

In the series to create history, Air India operated around the world flight on Delhi-SFO-Delhi sector.

To celebrate this achievement, a ceremony was also organized and all crew members of these flights were felicitated by the Air India.

The flight, which departed from New Delhi on February 27 for San Francisco, returned at the Indira Gandhi International airport on Wednesday after flying across the globe.

The aircraft, a Boeing 777-200LR, flew over the Pacific last week on its journey to San Francisco, while the return flight flew over the Atlantic, encircling the globe, Air India said today.

Ashwani Lohani, CMD, Air India, congratulated the women crew on creating history by operating first ever all women operated flight around the world and other flight on various routes.

"Each person and every society must respect women. It is a moment of absolute pride and honor for Air Indians that our women employees are writing their names in the annals of the aviation sector on a global scale," he said.

Speaking further on Joyride, he said, "This initiative is being taken so that people working in the sector for long years get a chance to fly. There are many who might have gone into an aircraft but never flown on this we will give them a chance to fly."