India   All India  08 Feb 2022  BJP manifesto for UP polls promises 10-year punishment for indulging in 'love jihad'
India, All India 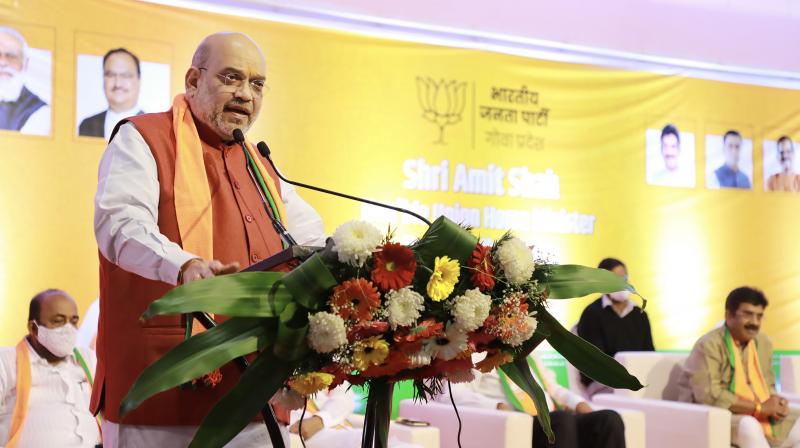 Lucknow: The BJP on Tuesday promised 10-year punishment and Rs 1 lakh fine for those indulging in 'love jihad' if it returns to power in Uttar Pradesh.

The announcement was made by Union Home Minister Amit Shah during the release of the election manifesto titled Lok Kapyan Sankalp Patra 2022' for the Uttar Pradesh Assembly polls.

The document was released barely a couple of days before the state goes to the first phase of polling on Thursday.

Speaking on the occasion, Shah claimed, "The BJP has fulfilled more than 92 per cent of 212 'sankalps' (promises) made in its 2017 (poll) manifesto."

The saffron party also promised free electricity for irrigation to farmers in the next five years in the Lok Kalyan Sankalp Patra 2022.

If cane payment is not made in 14 days to farmers, the sugarmills then have to pay the dues with interest, the manifesto said.

It said one well-equipped government hospital will be built in every district of the state.

In the next 5 years, the government will strengthen wheat and paddy purchase at MSP, BJP said.

To make the meritorious girl students self-reliant, under the Rani Laxmibai Yojana, free scooters will be given to them, it said.

Under the Swami Vivekanand Yuva Shashaktikaran Yojana, two crore tablets and smartphones will be given, said the manifesto.

General Bipin Rawat Defence Industrial Corridor in Bundelkhand will be completed in a record time, it said.